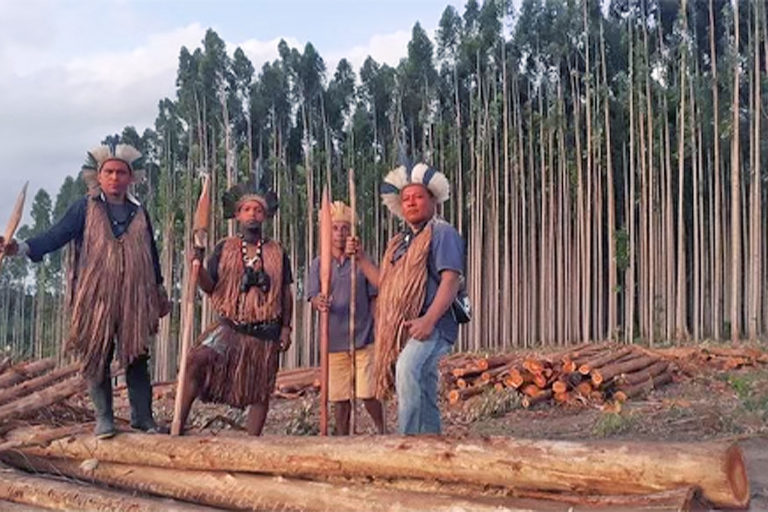 With the resumption of plantations, the Brazilian Pataxó natives decide to recover their land

Frustrated that agribusiness and eucalyptus plantations were destroying their territory, members of several Pataxó indigenous communities in the Brazilian state of Bahia took over a plantation, set it on fire and demanded that the multinationals definitively leave their lands, in order to stop external pressure on their lands.

In a video manifesto released June 26, a Pataxó leader stands flanked by two other men in front of a mass of burning eucalyptus trees. “We’re kicking multinationals, millionaires and billionaires out of here,” he tells the camera. “There won’t be a single eucalyptus tree left on our sacred land, because it’s bad. We want our water, our quality land and our biome reclaimed. We do not accept this shameful destruction.

On June 22, 180 indigenous people took over Fazenda Santa Bárbara, a plantation that was used to raise cattle and grow eucalyptus for the multinational paper pulp producer Suzano. According to indigenous leaders, the area occupied by the farm falls entirely within the perimeter of the Comexatibá (Cahy-Pequi) indigenous territory, which extends for 28,000 hectares (69,000 acres) north of the town of Prado, the one of the first places of the Portuguese colonizers. ‘ contact with the indigenous peoples of South America in the 1500s.

On June 25, another group of about 100 Pataxó took over another farm, a largely abandoned pasture, in the indigenous territory of Barra Velha do Monte Pascoal. The following day, landowners and their supporters allegedly expelled indigenous people from the area at gunpoint, according to a report by the Council of Indigenist Missionary (CIMI), an indigenous rights group affiliated with the Catholic Church. .

Both cases are suspended in bureaucratic limbo, like many other land rights issues centered on indigenous territories in Brazil. In 2019, the Superior Court of Justice recognized the legitimacy of the demarcation of the indigenous territory of Barra Velha do Monte Pascoal. But its final delimitation was blocked by the Minister of Justice, citing an opinion from a former president, Michael Temer. The Comexitibá indigenous territory began the demarcation process in 2005 and was demarcated and approved seven years ago by Funai, the federal agency for indigenous affairs, but is still awaiting presidential approval. Since Jair Bolsonaro took office as president in January 2019, he has not endorsed any indigenous territory – in keeping with his campaign promise to demarcate “not another centimeter” of indigenous land.

The Comexatibá indigenous territory is the scene of more land disputes than any other indigenous territory in Brazil, according to CIMI lawyer Lethicia Reis. The Pataxó not only face pulp production companies, but also growing tourism and agribusiness sectors, she added in a CIMI press release.

Eucalyptus is a key economic sector in Brazil, much of which is grown in the region comprising southeastern Bahia and the neighboring state of Espírito Santo. The region has a long history of conflicts involving eucalyptus plantations; activists have reportedly been killed in land grabs linked to eucalyptus expansion. The landless workers’ movement has occupied plantations and Afro-Brazilian Quilombo communities are increasingly resisting the negative environmental and social impacts of eucalyptus on their traditional lands, activists say.

Suzano, the world’s largest producer of cellulose, has increasingly acquired or merged with smaller pulp and paper companies, according to a UN report, and now grows eucalyptus on more than a million hectares (2.5 million acres) of land, much of it along Brazil’s Atlantic coast. The company has long touted its green practices, but environmentalists disagree about their actual sustainability in practice, Mongabay previously reported. But the position of the people of Pataxó is clear: in its manifesto, it denounced the multinational as being partly responsible for the ongoing destruction of its territory.

The eucalyptus species the company grows are particularly damaging to the environment and the communities that live around the plantations, environmentalists say. They require large amounts of pesticides which affect water quality and suck up large amounts of water. “Currently, pulp companies are exploiting the region by planting eucalyptus trees, which is causing serious environmental damage to the entire region, including deforestation and excessive use of pesticides. These practices have affected the water resources that still exist in the area,” Pataxó said in a statement.

In an emailed response to Mongabay, Suzano said she was aware of the situation and was monitoring it, but said “the area is not officially recognized indigenous land and has been the subject of ‘a detailed environmental licensing process with all notifications and requirements completed’. It also stated that it “does not own or operate any areas in indigenous territory” and that none of its areas in Brazil are “subject to land ownership claims or legal proceedings.” The company said it “adheres to strict standards and specifications and only acquires timber or operates in areas that meet all prerequisites set forth by law and national regulatory bodies and To support this, we have undertaken careful mapping of areas where ownership is held by indigenous peoples.

According to the Brazilian Constitution, indigenous lands are legally classified as territories traditionally occupied by indigenous groups, whether or not they have concluded the demarcation process, said Ana Carolina Alfinito, Brazilian legal adviser at Amazon Watch. “The indigenous right to land exists before the conclusion of the demarcation process. So in this case, the economic operations that take place in Pataxó territory are illegal,” she told Mongabay by phone.

Since the occupation of Fazenda Santa Barbara on June 22, groups gathering there have been cut off by farmers from outside supplies, including food and water, and have also been threatened, though that there was no violence, indigenous leaders said. On July 7, the government of Bahia sent an urgent request for more federal police in the region. The request has so far gone unanswered, Mãdy Pataxó, an indigenous chief in Mongabay, said over the phone.

Instead of eucalyptus, the Pataxó started planting native fruit trees like amesque, imabauba and sapucai.

“Pataxó families need the land for their survival and to promote indigenous agriculture, religious practices and the protection of existing natural resources,” an indigenous leader says in a video. “We ask for help from the Brazilian and international authorities and society. Support the aboriginal cause, which is real and legitimate. We can’t take it anymore, this land is our flesh, the water is our blood and the forest is our spirit.

“Pulp, monoculture and extensive agriculture are destroying everything,” he adds.

Banner Image: On June 22, a group of Pataxó began the first of two occupations to reclaim their territory and evict plantation companies from their land. Image courtesy of Rodrigo Mãdy Pataxó.

FEEDBACK: Use this form to send a message to the author of this message. If you want to post a public comment, you can do so at the bottom of the page.