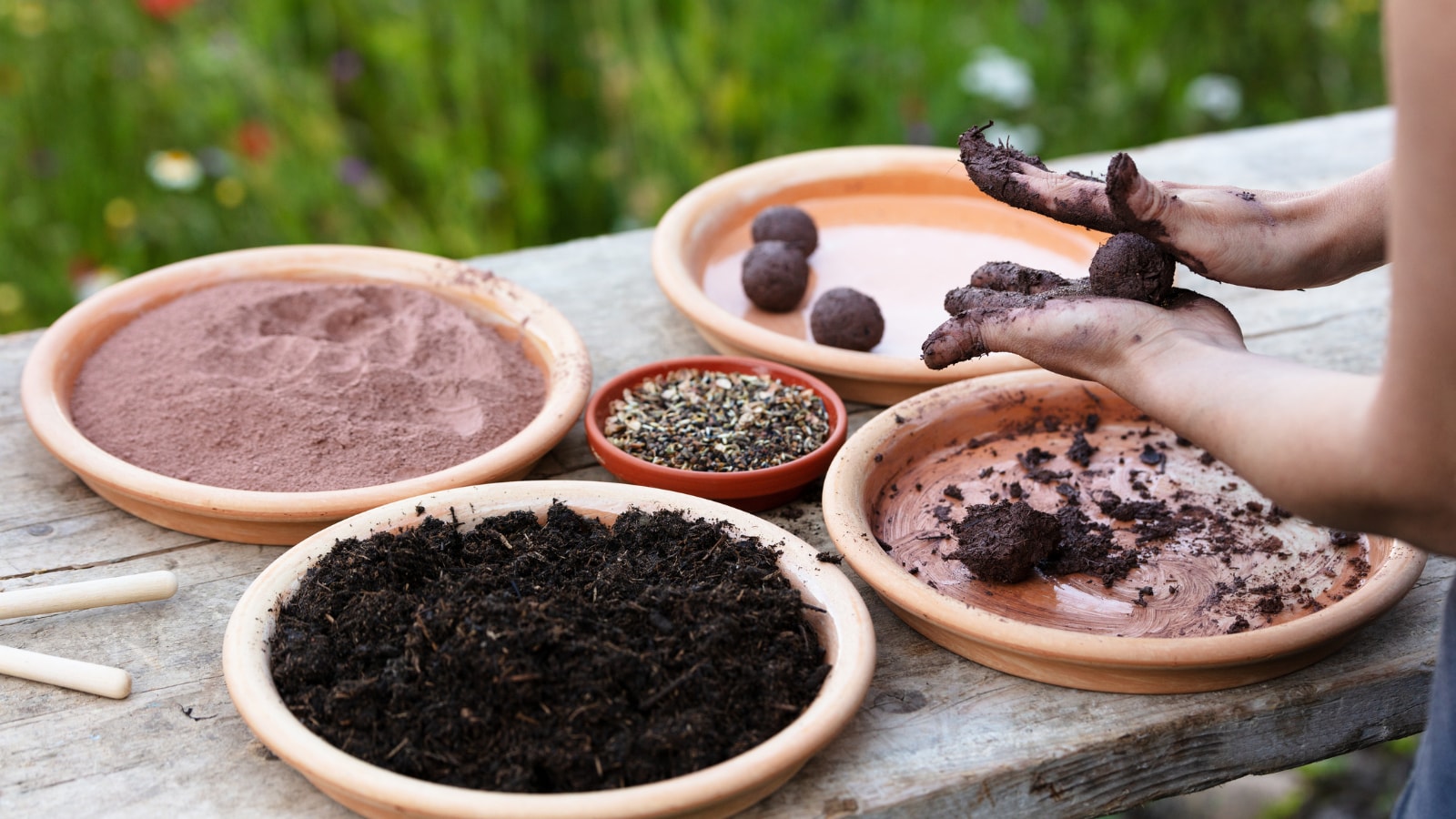 Have you ever wondered that 99.9% of the plants on this planet grow on their own without the “help” of human beings? The other side of the coin is that with the advent of human beings, more trees and plants have been cut down than “planted”. The plant kingdom is a self-sufficient and self-multiplying ecosystem. This multiplication is done by way of plant propagation – the offspring are born as seeds. These seeds are carried by birds, animals, air, and water away from parent trees, bringing more areas under tree colonies.

It will interest you even more to know that for a plant to sprout from a seed, three things are needed: the seed, the soil and the nutrients. The seed ball is a seed wrapped in clay with nutrients like coco peat or moss. It is an artificial method of spreading colonies of trees and plants by broadcasting seeds after giving them clay protection and an extra dose of nutrients.

Seed balls are prepared with clay, nutrients and seeds of desired plants. Wet clay from the river bed is ideal and dried in the sun, then the seed ball material is added and takes the shape of a marble. Coco peat, humus, compost or cow dung are used as nutrients that act as both perforators and water retainers. It is best to use a mixture of different seeds in the same bale, to maximize the yield of the tree planting operation.

Under moist and favorable conditions, the seed balls germinate. They are dried before being sprinkled. They are also known as seed bombs. Unlike traditional bombs that sow destruction, Seed Balls explode to spread greenery. Seed bombing is an agricultural technique of introducing vegetation to land by throwing or dropping seed balls. They are widely used in the United States, Thailand, Kenya and other African countries to grow plantations. These seed balls are dropped into the air as seed bombs to increase tree cover. The most recent attempt at seed bombing is to use drones to launch the seeds.

According to legends, seed balls are part of ancient Indian traditions. Do you know how Lord Jagannath’s form was rediscovered? It was discovered by the germination of seed balls. According to legends, there once lived a great devout king, Indradyumna, who wished to enshrine the most splendid form of divinity in his newly built temple for Lord Jagannath. He sent his ministers and officials to distant places to discover the purest form of divinity. One of his ministers named Vidyapati reached a place near modern Puri. He heard the tribals there worshiping a deity hidden deep in a high forest whose form was hailed as the most splendid in the world. Vidyapati played a game. He tricked the tribal leader’s daughter and married her. His stepfather agreed to show him the deity on the condition that he be blindfolded. During the journey, Vidyapati managed to leave a trail by dropping mustard seeds. When they reached the secret place of the deity, Vidyapati was stunned by the unparalleled beauty, aura, and sanctity of the deity. As soon as Vidyapati returned after seeing the deity, he left the village to report to King Indradyumna. The king’s men could reach the place where the deity was by following the trail of the now sprouting mustard flowers. However, the king could not find the deity! This shows that the seeds can be used by humans to germinate plants.

How to make seed balls

– Take clay, seeds, compost and moss. Now mix equal proportions of red clay soil, black soil and compost. Slowly add 1-2 parts water until you get a thick, pasty consistency. Put the seed you have chosen in the center (maximum three seeds). Once you have placed your seed, roll the portion of dough between your hands into a ball of seed the size of a marble. Let them dry for 24-48 hours until completely dry. The dried clay protects the seed from seed predators (ants, mice and birds) as well as breakage. Once enough rain soaks the clay, the seeds within begin to sprout, aided by the nutrition and minerals (humus) in the balls. Seed balls should be scattered on the floor and forgotten. They will sprout when there is enough rain. There is no need to plant them, as they are already surrounded by soil, nutrients and microorganisms.

When and what kind of seeds should I use?

In general, seeds from native plants or trees should be used. They have a better chance of survival and germination. The best time to sprinkle seed balls is during the rainy season, when the chances of germination are higher.

– Seed balls help increase green space. They can work well anywhere in any season, but the most productive season is the rainy season. Seedballs have an 80% growth success rate compared to regular seedlings.
– They reduce the work of plowing or digging holes for seeds.
– They can be thrown in inaccessible places like hills, steep slopes, arid lands, watersheds, remote areas, etc. and help reclaim abandoned land.
– They can be simply scattered directly on the ground and do not need to be planted in the conventional way.
– They stay healthy for years and are protected from wind, birds, squirrels and other critters.
– Seed balls are useful for sowing in dry, thin and compacted soils.
– They are easy to use and huge and inaccessible areas can be covered in a short time.
– Seedballs are affordable, durable and an effective conservation tool for establishing vegetation in difficult areas.
– Seedballs are especially useful in dry, arid areas where rainfall is sparse and highly unpredictable.

Recently, the Prime Minister at the Drone Festival highlighted the use of drone technology to drop seedballs, emphasizing the importance of both seedballs and the technology to deliver them.

Geetanjali Mehra is an interior designer by profession. She is co-author of the book “Gift Lungs to Future Generations”. The opinions expressed in this article are those of the author and do not represent the position of this publication.

Effect of climate change on animal production of milk, meat and eggs