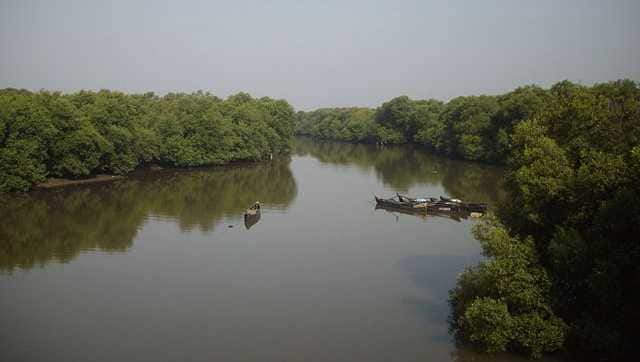 The Vashi stream and its magnificent mangrove forests in the densely populated city of Mumbai. Image courtesy of Rudolph A Furtado/Wikimedia Commons

Biodiversity is the engine that drives the vital processes that support life on earth. Food supply, clean air, protection from extreme weather events and maintaining our health are some of the benefits provided by biodiverse ecosystems. While some aspects of biodiversity are much discussed and visible as problems, there are many that do not receive much attention.

For example, while the importance of bees and other insects for pollination and food supply is widely understood, the connection between the survival of these species and the ecosystems that support them is relatively unexplored. Some essential ecosystems, such as mangroves, are biodiversity hotspots and serve a variety of ecological purposes. Even though the functions of mangroves are known and recognized individually, it is imperative to consider them in their entirety and connect their importance to the larger issues facing the nation and its various communities.

Mangroves are located on the edge of coastal areas and are the first line of defense against extreme coastal weather events such as cyclones. Their thick canopies and tangled aerial roots dissipate wind and wave energy, minimizing damage to areas further inland. Root systems stabilize coastlines as they prevent soil erosion – a crucial function given rising sea levels. Mangroves also sequester carbon from the atmosphere. The sequestration capacity of this ecosystem is up to four times greater than that of terrestrial forests. For bustling coastal metropolises such as Mumbai or Kolkata, this helps reduce emissions and maintain air quality in the city.

Climate action is one of the top priorities for India (and nations around the world). Coastal areas are extremely vulnerable to climate change and global warming. Rising temperatures have caused mean sea levels to rise, exposing many coastal regions to flooding.

The increase in intensity and frequency of extreme weather events, particularly cyclones, has already caused loss of life and destruction of infrastructure in these areas. For the 7,500 km of Indian coastline, the defense provided by the mangrove forests is essential for survival. The role of mangroves in climate change mitigation and adaptation strategies for these areas cannot be overstated.

Mangrove forests are home to some of the most endangered wildlife species in the world.

The Sundarbans in India, for example, are home to the Bengal tiger, estuarine crocodiles and endemic river terrapins – all are endangered or threatened species. Mangroves also serve as nurseries for a wide variety of fish.

The low underwater visibility and tangled roots are excellent shelters for smaller varieties of fish and other aquatic species, as they prevent large predators from preying on them. The nursery function of mangroves supports the livelihoods of diverse fishing communities. An example of this is the mangroves along Thane Creek which support Mumbai’s Koli fishing community. Similarly, many other communities that have traditionally engaged in forestry occupations depend on the resources of the mangrove forests in their areas. Thus, mangroves also play a crucial role in sustaining livelihoods.

Raising awareness of biodiversity conservation is a multi-faceted issue, the basics of which begin with research. Research helps to better understand the characteristics of various ecosystems and their implications for people’s lives. Coupled with awareness campaigns, encouraging citizen participation can create more pathways to protect biodiversity ecosystems. It should be noted that conservation action by citizens should be one of the main results of awareness campaigns.

The Vikhroli Mangroves, which are preserved by Godrej & Boyce, are a great example of creating multiple touchpoints for their conservation. An integrated multi-stakeholder approach has been put in place to conserve and enhance the area’s biodiversity. Supported by the Pirojsha Godrej Foundation, studies are conducted by the Soonabai Pirojsha Godrej Foundation to document floral species.

A joint campaign by Godrej & Boyce with WWF India has trained and equipped 100 young people from nine coastal states of India to raise awareness about mangroves and ways to preserve them in their respective states. Such programs addressing various aspects of conservation go a long way in educating and encouraging citizen participation in biodiversity conservation. The Vikhroli fishing community appreciates the importance of the Pirojshanagar mangrove ecosystem to their livelihoods and contributes to the research and conservation of it. They also support the rescue of injured birds in distress for their scientific healing and rehabilitation.

Another example of mangrove conservation can be highlighted through a women’s group in Odisha. Ravaged by extreme weather conditions, the livelihoods of these women have been severely affected. Through a local gender-focused program and consultation with women, alternative livelihoods have been found in the establishment of mangrove nurseries. Mangrove plants from these nurseries are used for reforestation and rehabilitation of degraded wetlands in the state. This demonstrated that livelihood generation and conservation are complementary and need not be mutually exclusive.

Ecotourism is another opportunity that mangroves can provide. This can be promoted by engaging and educating local people to become tour operators to responsibly conduct mangrove tours. A good example of this is the Maharashtra Government’s Mangrove Cell initiative in which local communities in a few villages of Raigad, Ratnagiri and Sindhudurg were trained to undertake ecotourism activities in the mangroves as part of a community conservation initiative for the development of local communities and to promote the conservation of mangroves and marine biodiversity.

The world is in the midst of a climate crisis and has barely managed to pull itself out of a pandemic. The importance of biodiversity in both cases, supporting ecological processes and reducing harmful human-animal interactions leading to zoonotic diseases, is well established. Now is the time to act immediately to preserve our ecosystems and our biodiversity. It is imperative that well-placed organizations mobilize resources to drive conservation efforts and find ways to foster relationships that encourage citizens to preserve their natural heritage.