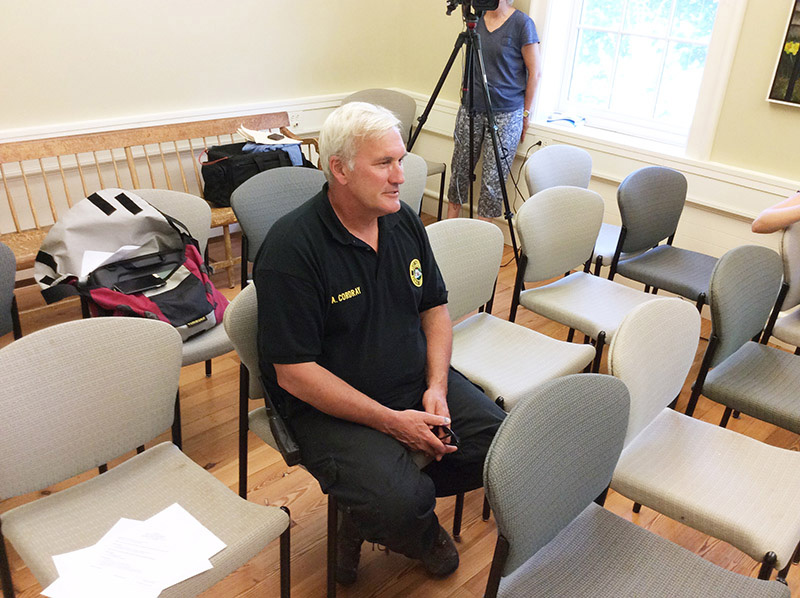 At a Zoom meeting on Wednesday, West Tisbury’s board of directors were presented with two separate dog-related issues – one involved a runaway Shih Tzu and the other a foster-foster Newfoundland .

Janet Alley filed a complaint about a Shih Tzu named Husky owned by Carla Domian-Gomes. Alley said Husky had been found on his property four times, disturbing his horse. According to a report written by West Tisbury Animal Control Officer Anthony (“Tony”) Cordray, these incidents occurred between March and April. The dog never entered the horse’s paddock, as Alley was present every time to chase him away. Cordray said his office responded every time and asked Gomes to keep the dog on a leash whenever he was outside. Cordray said he was also concerned about the horse’s safety, as it was right off State Road, and didn’t know how the animal would react if the dog got any closer than it did. did.

In addition to disturbing the horse, Husky was found on the roads, totaling six incidents. “I had two responses at State Road and Old County with the dog being in traffic,” Cordray said. He said that despite repeated complaints, the most he is allowed to do is write a quote.

Gomes has a leash when she walks Husky, but other family members who walk the dog have failed to oblige. She told the board that the dog is usually indoors and never goes out alone.

Gomes says his 4-year-old son opens the door using his other son’s hockey stick, allowing Husky to escape. “He grabs the hockey stick, unlocks the latches I put on my door, and he and the dog escape from my house,” she said. Gomes showed a video of his son doing this to Cordray and his colleagues.

Gomes says the kid wasn’t alone when he unlocked the door. He was entrusted to his grandmother, who filmed the video.

The board has decided to label Husky a nuisance dog for breaking leash and harassment laws. If he is found off leash, Cordray has the power to capture him and issue fines of up to $ 500. They also recommended that Gomes build an enclosure so the dog could not escape. Gomes said she had previously purchased an electric fence and collar for Husky, to which the board gave their initial approval.

Samuel Hurd also filed a lawsuit, but against Cordray. According to Cordray’s report, on April 16, he received a report from Dawn Barnes that two dogs were running in traffic on Old County Road. Cordray transported the dogs to the kennel. One of the dogs was Baloo, a Newfoundlander in Hurd’s care as part of his volunteer work with Angels Helping Animals (AHA).

Cordray and Hurd wrote that the other initially expressed aggressive actions. Cordray wrote in the report describing the situation with Hurd that “he then asked what right I had to ask for this type of information.” He then reportedly said to Cordray, “I heard you were a [expletive]. “

Cordray reported that so far “everything was calm.” According to Cordray, Hurd continued to use vulgar language and eventually left without the dog or properly filling out the form to retrieve it.

In a letter, Hurd wrote: “In my attempt to bring Baloo home, I witnessed what I can only describe as utter and utter disregard for the law, intimidation, abuse of power and a lack of respect unworthy of any official. He alleged Cordray was prepared to escalate the situation to physical violence and was unfit for a position. Hurd wrote that he had heard others say that they had had similar incidents with Cordray, where the officer told them to “just do as he says”.

Hurd also wrote that Baloo had a Type III heart murmur, claiming the situation could have been life threatening to the dog.

Cordray wrote that Baloo was picked up the next day by Cheryl Dewitt, a veterinarian representing AHA. The report states that Kimberley Andrade, Cordray’s assistant, was tasked with requesting proof of license from Dr Dewitt. Dr Dewitt said the license would be emailed to Cordray the following Monday. Cordray told The Times he had not received the requested license by May 21.

Hurd said he believed there were inaccuracies in Cordray’s report, but board chairman Skipper Manter said, “I don’t want to get into a debate about his report on what you believe to be correct or inaccurate. We will respond to your complaints in your letter.

“These issues are difficult… there are two sides to every story, and it’s very difficult without a third person or some form of independent verification of what has been written on each side,” Manter said. Manter said he believed both sides wrote down what they thought they transpired. However, as far as Manter can see from the outset of what was presented, he doesn’t think Cordray did anything improper in the line of duty.

Manter claimed that Hurd’s letter is taken seriously. “I would also add that we have not received, since Tony was ACO, any complaints of this nature before,” said Cynthia Mitchell, member of the board of directors. “I think Tony represents the city very well, and I think he will continue to do so, and know what we expect from him.”

Hurd said Baloo was fine now, but feared for Newfoundland’s safety if he went out and met Cordray again.

In other cases, the select council decided to approve the relaxation of restrictions on the town hall from Thursday, May 20.

Jennifer Rand, the city administrator, said it would be a smooth opening in the process to allow full public access. Masks will be compulsory and only one customer will be authorized per floor. The third stage plans to operate slightly differently. If a guest is on the third floor, staff will assist them in the outside lobby. The elevators and the stairwell will be open, but the office doors will remain closed for the time being. Staff will wear masks when interacting with the public. Rand said she expects those restrictions to ease even more in the future.

Additionally, Rand said the board will need to hold in-person meetings at City Hall by June 16 due to an announcement made by Gov. Charlie Baker on May 17. This will affect all West Tisbury boards and committees. Legislation is proposed to allow the public to continue to participate remotely. Rand said she is currently working with various companies to research a way to form a hybrid meeting format.

Manter has expressed support for continued remote participation. Reducing cars on the streets would help soft plans to reduce West Tisbury’s dependence on fossil fuels 100% by 2040. He said whether in-person or remote participation in future meetings should be an individual decision, whether by a selected board member or a member of the public, if a hybrid model is implemented.

The fight against climate change in the vineyard begins underground

From waste to the land: Reuse vineyard waste as compost | Local news