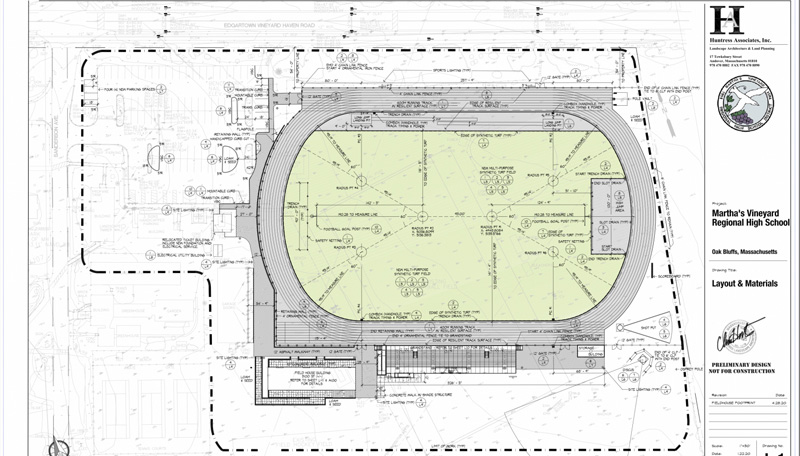 Two potentially impactful developments in the polarized saga of the Martha’s Vineyard High School Track and Field Replacement Project have begun to unfold.

In October 21 letter from Oak Bluffs home inspector Tom PerrySuperintendent of Schools Matt D’Andrea was told that the synthetic turf and track project “must apply for a special permit from the planning board” in order to proceed. Perry’s letter stated that since the project area is located within the Water Resources Protection District and the project appears to include toxic material, the special permit is required by municipal bylaw. The synthetic turf pitch is not mentioned in his letter, but opponents of the project have pointed out potential contaminants in the plastics used for the turf.

â€œWe are grateful that the Town of Oak Bluffs takes the threat of these highly toxic and bioaccumulative substances. chemicals are a serious problem for the island’s water supply, â€the Field Fund wrote in a statement to The Times.

The project won a narrow victory with the Martha’s Vineyard Commission after a long public hearing process.

“It has been the subject of a deathly debate,” he said, adding that no scientific evidence has shown the field to be toxic or dangerous to children, and that the Martha’s Vineyard Commission, during six meetings and through 80,000 pages of documents, found the drawbacks to the project must be “de minimis”. Donahue claimed the project would prevent 200 pounds of nitrogen from entering local water bodies – that’s one ton of nitrogen every decade. And with a padded underlay, Donahue said, the project would reduce concussion injuries by 25%.

“For eight years, it’s been an irrational fear,” he said of criticism of the project.

Meanwhile, a registration request made by the Field Fund to officials in the Martha’s Vineyard Regional School District resulted in a letter from D’Andrea – a letter with a request for fees of $ 121,508.33. Dated October 26, the letter identifies D’Andrea as a “Records Access Officer” and responds to a request for correspondence from Vineyard Athletics Inc., correspondence from directors of Vineyard Athletics Inc. and correspondence relating to funding from scientific consultant Dr Laura Green. In support of the six-figure registration fee, D’Andrea wrote that the school district has already processed one or more large Field Fund registration requests for free, and another cannot be managed without the to invoice.

When asked if he believes the charges claimed were actually sustainable, D’Andrea emailed, â€œIt’s not my job to determine what is viable. My responsibility is to determine the extent of the work necessary to meet the demand and to apply the charges authorized by law.

When asked if the school district had ever requested a six-figure fee, D’Andrea wrote, â€œWe have had requests before that were also very extensive and would have required significant fees. During my mandate, to my knowledge, we did not receive fees for a file request. We always try to adapt if the request is reasonable, as we have done in previous requests.

D’Andrea wrote that the letter was written in conjunction with law firm Braintree Murphy, Lamere and Murphy.