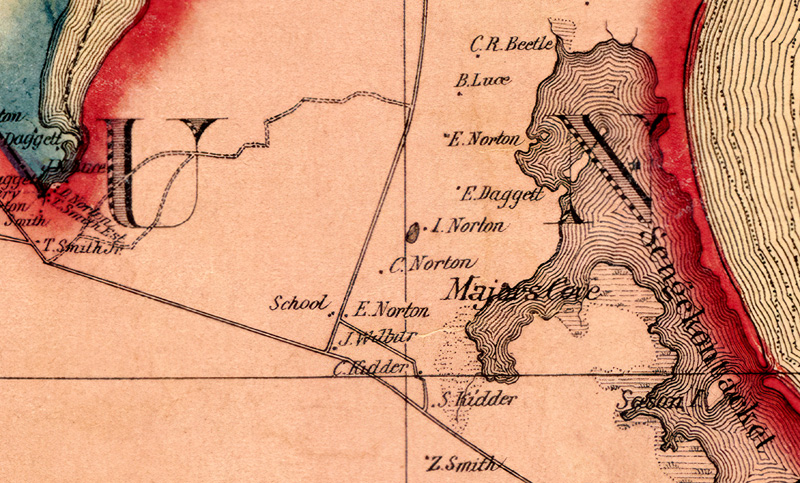 That was then: the old county road

The Edgartown-Vineyard Haven road dates back to the late 18th century and probably earlier, but not entirely in its modern location.

It was along this road that British troops drove thousands of plundered sheep and other farm animals during Grey’s infamous raid in 1778. Scouring the island for sheep, cattle, arms, food and valuables, the troops under the command of Lieutenant-Colonel Sterling marched from Holmes Hole to Edgartown and returned with cattle and booty along this wooded road, which they took loaded onto transport ships in the port of Holmes Hole and left, leaving the vineyard destitute.

As you came from Edgartown, the old winding road came to a fork not far from the modern county road at Oak Bluffs (near Quantapog Road). The right fork – what we know today as County Road – took you past farmers’ fields and sheep pastures on the east side of the harbor to Eastville. The left fork sank through uncut forest, eventually bringing you to the west side of the harbor at Holmes Hole.

At the fork was a cluster of old farms and the Farm Neck School. The oldest English settlement in what is now Oak Bluffs, this area dates back to Nicholas Norton’s 17th century trade tannery and dam at Majors Cove. His son Joseph Norton’s house was later moved to Edgartown, where it is still one of the oldest houses on the island.

Farm Neck School was built in 1775 or 1761 (reports vary), evidently rebuilt around 1830 and remained in operation until the late 1800s. The building itself survived until the early 1900s (Its modern location would be on County Road, just north of Quantapog.)

One of the first teachers here was William Butler (1761-1844) whose diary is kept in Martha’s Vineyard Museum. He also owned what would become the Camp Meeting ground in Oak Bluffs. In a typical 1792 diary entry, Butler writes:

“Wednesday, January 11. Very Cold – A singular case occurred that day at school as scholars stood up in spelling, James Johnson struck Jethro Coffin on the head with his hand, being vexed with him for pulling my hair, he said, as he was hanging up his slait. I think it was not because I didn’t keep order at school, but because of character careless of the boy.

One of the last teachers here may have been Mrs. Martha W. Luce, a schoolteacher who lived nearby in 1860.

Before Cottage City put our island on the map, “Farm Neck” was the general name used for virtually everything we now call “Oak Bluffs” – everything west of Sengekontacket and east of the lagoon, d ‘Eastville to the area comprising downtown Oak Bluffs. With the exception of the tenuous barrier beaches to the east and west, both known as “Beach Road”, Oak Bluffs is indeed a piece of land, a peninsula. Eventually the name “Farm Neck” began to refer only to the land west of Majors Cove. The main access point to all modern Oak Bluffs, the junction of the two county roads was a natural crossroads for a settlement.

Here, in the mid-1800s, stood the small farm of the Wilbur family. Adjacent to the Fork to the south, the Wilburs grew rye, corn, oats and peas on their small 34-acre farm, from which it was said you could see the church steeples of Edgartown through the clear-cut fields along Sengekontacket. Across the road from the Wilburs was the much larger farm of Elijah Norton (1795-1881), who tended a flock of 60 sheep on his 225 acres. Just to the east of them lived the Kidder brothers – James and Charles, who each owned a substantial farm near Majors Cove. On nearly 200 acres combined, the brothers grew rye, corn, oats, potatoes, and barley, raised sheep, and produced butter and wool. (As a young man, Stephen had been one of the survivors of the infamous 1824 mutiny on the whaler Globe.) To the north, Elijah Norton (1795-1881) maintained a sprawling 225-acre farm, with sheep and cattle, and fields of rye, corn, oats and potatoes. Norton was one of the largest wool producers in the city.

In 1851 the towns of Tisbury and Edgartown (which at the time still included Oak Bluffs) paid $2,850 ($1,950 from Edgartown and $900 from Tisbury) to lay a new, straighter highway between their towns – that that we know and love as the Edgartown-Vineyard Haven route. The old Holmes Hole Road was relegated to serve as a bypass. Today much of the old road has become a defining trail in the Land Bank Southern Forest Reservation trail system.