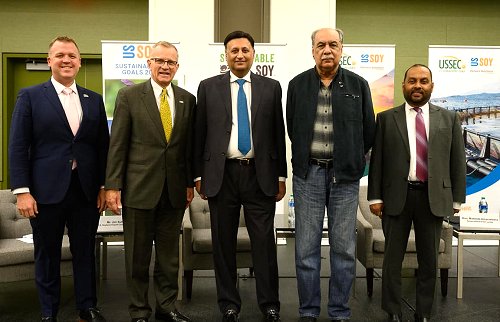 Oct 24, Colombo: Mahinda Amaraweera, Sri Lankan Minister of Agriculture, Wildlife and Forest Resources Conservation, told the annual conference of the US Soya been Export Council (USSEC) that the Livestock industry in Sri Lanka has been badly affected by feed shortage. and rising prices.

Sharing the country’s visions for food and nutrition security amid economic crisis, COVID and climate challenges, the minister said there has been a collapse in the livestock sector in Sri Lanka due to the epidemic situation of Covid 19 as well as the collapse of the world. economic and geopolitical problems in other countries.

The conference began last week in Washington, DC and the team representing Sri Lanka is led by Minister Mahinda Amaraweera.

Last Friday, Minister Amaraweera officially met Kim Reynolds, Governor of the State of Iowa at the conference and discussed the current situation in Sri Lanka.

Responding to the Governor of Iowa, who inquired with the Minister on the economic crisis that Sri Lanka is currently facing, Mr. Amaraweera said that Sri Lanka is facing the current economic problems due to the epidemic situation. of Covid 19 as well as the collapse of the global economy and geopolitical problems in other countries and the mismanagement of loans contracted for Sri Lanka’s development projects.

However, due to the positive activities undertaken under the leadership of the current President, Mr. Ranil Wickramasinghe, the economy of Sri Lanka is heading in a good direction in the coming year, the Minister also mentioned.

The minister also mentioned that the United States, in particular, is giving huge support to Sri Lanka at this critical time.

Minister Amaraweera, who delivered a speech on behalf of Sri Lanka at this conference, said that Sri Lankan farmers are not very interested in growing soybeans because they do not know the international demand and also in due to the lack of a good market.

Therefore, the minister asked the council to express their support to encourage farmers in Sri Lanka to grow soybeans.