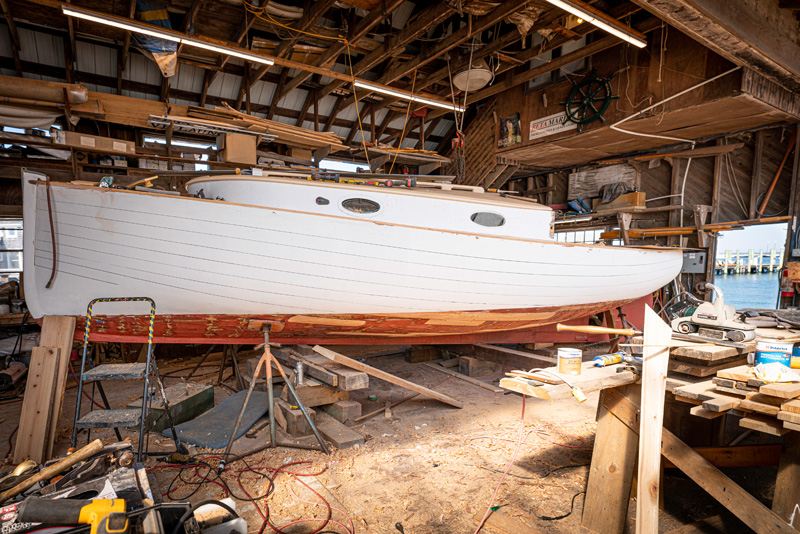 Looking out the door of the Gannon & Benjamin Marine Railway all covered in sawdust, the catboat Old Sculpin waits for the day when its centerboard can once again cross the waters of the island, and the sandy shoals will once again become its playground.

This sturdy vessel, with a wide hull and comfortable cabin, has been in the care and ownership of many different sailors for over a century, and many unforgettable memories have been created. But perhaps the most interesting historical elements have to do with the creation of this beautiful boat. With its sloping coating and elegant features, Old Sculpin was crafted by a true master of the shipbuilding art – Manuel Swartz Roberts.

You may not know him by name, but you’ll recognize his odd moniker, Old Sculpin, as the namesake of the quaint Harbor Art Gallery in Edgartown. According to Martha’s Vineyard Art Association (MVAA) artist and chair of the events committee, June Schoppe, Roberts was born in 1881 and lived on the Katama family farm. He was supposed to be in charge of looking after the cattle grazing in the fields, since his father was in a wheelchair.

Often, as Roberts watched cattle, he was drawn to the sound of sawing and hammering and stumbled upon an active construction site. It was during these pointless wanderings that Roberts developed a penchant for building. He offered his services in different houses without even asking for compensation – he loved to create. Eventually, he switched from house building to the adjacent craft of boat building, and never looked back. “I think deep in his heart he was always a boat builder from day one,” Schoppe said.

A rustic loft belonging to Dr. Daniel Fisher was for sale near the Edgartown Marina. It had served all sorts of purposes before it was acquired by Roberts as his home and workshop. It was a sailmaker, grain factory, hardware store and, from 1905, a boat building shop owned by Roberts. At the age of 26, Roberts’ carpentry skills lent themselves perfectly to boat building, and the boilers and steam heaters used to bend and shape timbers kept him warm in the harsh, windy winters on the Atlantic. ‘water. This was a preferable situation, compared to stapling shingles on a roof.

In 1912, after Roberts used his building skills to install an additional loft tower so his family could live with him in the store, Old Sculpin made its maiden voyage. As Roberts’ career in boat building unfolded, a varying assortment of artisans and creatives came to his shop.

He was everything from a counselor on day-to-day affairs and a professional technician for any type of boat or building repair advice, to a philosopher and a marriage counselor. Schoppe called it a “one-stop shop”.

“He always left the door open and people were walking around. He was a very gracious guy and everyone was always welcome,” Schoppe said. “People would come and take a seat, sweep sawdust on a table, move boards around and sit there while Manuel does his work.” Most of the time, the shop’s customers were artists – painters, designers, sculptors. This group of (then unknown) artists spent time in his studio painting him while he tied, hammered and bent. Some of these paintings exist today in the Old Sculpin Gallery.

In 1954, after a long career in boat building, Roberts expressly sold the building to the art group, as they needed space for a gallery. Upon acquiring the act, the band formed the MVAA and the Old Sculpin Gallery found their lifelong home.

To celebrate Roberts’ life and work, the MVAA held a catboat parade in Edgartown Harbor and a catboat exhibit at the gallery in 1979, featuring themed artwork, oral history, rusty tools of Roberts’ shop and many other historical artifacts. Last year saw the first restart of this catboat event, where catboats from Cape Town, Long Island and of course Martha’s Vineyard took part in a parade around the harbour.

Now, Schoppe said, the MVAA is making the event an annual thing, and this year’s event will be just as large and historically significant as the first, in 1979. There are thought to be just six catboats built by Roberts intact, although he built over 200 catboats throughout his long career. Many will participate in the parade this year. The week-long catboat celebration will take place July 16-22, with a special exhibit available at the Old Sculpin Gallery in Edgartown.

For Schoppe, things made by hand have always fascinated and excited her, especially when they exemplify the absolute embodiment of quality and craftsmanship in this particular discipline. “It’s something that comes straight from your heart and soul, and you can tell just by looking at Old Sculpin that it comes from the depths of Manuel’s inner being,” Schoppe said. Just knowing that the boat is in the capable hands of Ross Gannon and Nat Benjamin at their shipyard, she added, and that it will sail for years to come, brings her endless joy and excitement. end.

The fact that Gannon and Benjamin are restoring the boat to its original design specifications also impresses Schoppe from an engineering perspective. “The slender curves of her bow, her balance and weight in the water and her generous sail perched on her gaff rig are as unchanged as when Manuel first put pencil to paper, tracing her magnificent lines under all angles,” she said. “We, all artists, catboat owners and Manuel, share a common artistic talent in our respective roles. One hundred and twenty-two years after Manuel built his first boat, this commonality unites us and will continue to unite us as we celebrate Old Sculpin: the boat builder, the boat itself and the artists who keep it afloat for another generation. ”

Benjamin spoke to The Times in his shop as hazy afternoon light shone through the plastic sheeting that encompassed the workspace. He spoke of former owners of Old Sculpin as Alan and Patricia Symonds (good friends of the veteran boat builder). The boat was called Winsome Wiggy under Symonds ownership, but it sailed just as it did when first built.

“We worked on Winsome Wiggy 40 years ago when we started the shipyard,” Benjamin said. “It was in pieces in Providence and was brought here on a sail barge by our friend Rick Brown. It went straight to this store here, and it was one of our first big projects.

Benjamin reached out to current Old Sculpin owner Tim Sheehan at the one-week catboat event last year, and the two talked about getting some work done on it. “And now it’s here, and there’s been a lot of work already,” Benjamin said.

According to Benjamin, catboats are unique to the coasts of Massachusetts and Long Island. With their shallow draft and robustness, they could cross bays and straits where the water was shallowest. They were great for inshore fishing, but as the Cape and the islands became the hotspot for seasonal tourism, catboat sailors stopped fishing in the summer and used them for picnics and cocktail parties.

“They have a big cockpit, a big sail and one person can easily sail with a group of guests,” Benjamin said. The Martha’s Vineyard Museum also has a Roberts catboat, called Vanity. Other catboats were built by Erford Burt, who was Roberts’ assistant and apprentice for many years. Benjamin and his team began work on Old Sculpin in the fall, slowly honing in on sanding, replacing wood, painting and shaping the boat for Sheehan and his family. “It’s a complete winter job for a few people, that’s for sure. It’s a very comprehensive restoration,” Benjamin said. “We’ve done other projects where it was even more comprehensive, and the only things we were able to save were the lead keel and some door handles. But with Old Sculpin we save a lot more.

The transom and bow are both in good condition after Benjamin and his boat builders put them in place 40 years ago, along with the centreboard and several other parts, but the hull is in the process of being almost completely rebuilt.

For Benjamin, having a boat he worked on 40 years ago in the workshop is a fun and enlightening experience. “We can look at the work we’ve done and say, ‘Damn, look at what we did there. Maybe we should do it differently this time around,” he said. “You always learn things, and it’s nice to see a piece of history like this come back after more than a century of well-being. It will continue to sail for another century with any kind of reasonable care.

Catboats built by Roberts and others will take part in the catboat parade on July 16, immediately followed by the Manuel Swartz Roberts Cup Race. Gannon & Benjamin will host a talk at their shipyard on July 19 from 6-7:30 p.m. where they will discuss some of the work they have done on the boat. Catboat owners can contact Kurt Peterson at [email protected] to register for the event before July 1st. For more information about the event and the exhibition, contact June Schoppe at [email protected].