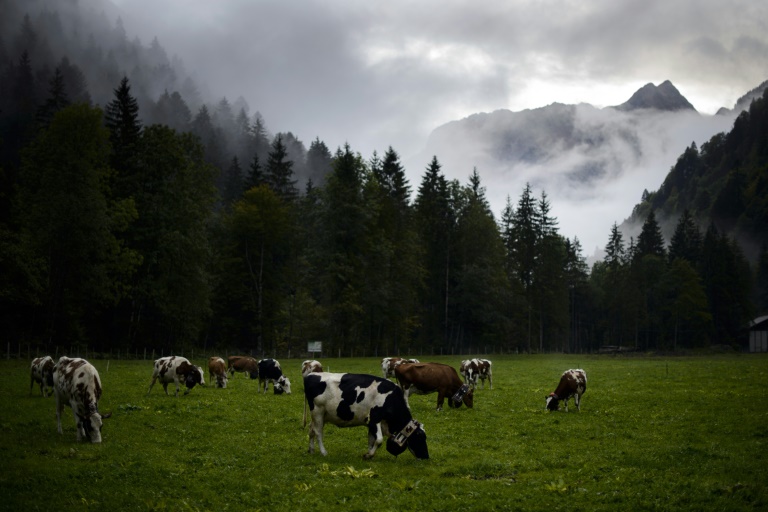 The Swiss will vote on Sunday on whether to ban intensive farming in the largely rural country, which already has some of the strictest animal welfare laws in the world.

The animal rights and protection organizations behind the initiative want to make protecting the dignity of farm animals like cattle, chickens or pigs a constitutional requirement.

Their proposal, which has received more than 100,000 signatures needed to put any issue to a popular vote under Switzerland’s famous system of direct democracy, would essentially eradicate all factory farming.

“We believe that animal agriculture is one of the defining issues of our time,” says animal welfare group Sentience, which introduced the initiative, on its website.

He points to the “tremendous suffering experienced by animals in industrial farms”, but also to scientific studies showing that “industrial farming is disastrous for the environment and detrimental to our health”.

If accepted, the initiative – which has the support of left-wing parties, Greenpeace and other environmental organizations – would impose stricter minimum requirements for animal-friendly housing and care, access to outdoors and slaughter practices.

This would also significantly reduce the maximum number of animals per pen.

The government and parliament oppose the initiative, insisting that Switzerland already has strict animal welfare laws defining the living space each animal should have.

The initiative “goes too far”, Swiss Health Minister Alain Berset told reporters in June, saying the government for a quarter of a century had promoted “respectful animal husbandry“.

Under current laws, farms cannot keep more than 1,500 fattening pigs, 27,000 broilers, or 300 calves, which essentially rules out the types of massive factory farms found in other country.

“There is no factory farming in Switzerland,” insisted Marcel Dettling, farmer and parliamentarian from the right-wing populist People’s Party.

Pointing out that the limits in neighboring Germany, for example, can be 100 times higher, he told Swissinfo.ch the move would only serve to raise prices.

Sentience campaign manager Philipp Ryf, however, said that when you have 27,000 chickens crammed into a pen and only 12% of the farm animals come out, “we think that’s factory farming”.

He acknowledged to AFP that the law in Switzerland “is quite strong compared to other countries”, but added: “We don’t necessarily think it’s a good measure”.

“We want to look at what we’re doing… We think we could do more.”

The government also warned that if the initiative were passed, prices would inflate and warned it could also impact relations with trading partners.

Indeed, the requirements would also apply to the import of animals and animal products, which, according to the government, would oblige Switzerland to violate its obligations within the World Trade Organization and to renegotiate trade agreements.

The Swiss should also invest large sums in costly inspections of foreign farms, he argues.

Such arguments seem to have convinced a growing number of Swiss.

While early polls showed a slim majority in favor of the initiative, the latest gfs.bern poll last week saw the ‘no’ side take the lead, with 52% of those polled opposed. initiative.

Farmers themselves are particularly skeptical.

The latest poll showed 62% of those polled in rural areas rejecting the proposal, while 53% of city dwellers polled said they would vote for it.

Ryf said the strong opposition in rural areas was largely due to a well-funded campaign by opponents of the initiative that had spread the “misconception” that it would be bad for farmers.

“We regret this because we believe our initiative will be good for farmers,” he said, stressing that it would bring them support and 25 years to implement the changes.

While Switzerland’s largest farmers’ association is fiercely opposed to the initiative, many smallholders support it.

David Rotzler, who owns a small and diversified livestock farm in Sonvilier in northern Switzerland, told the daily Journal du Jura that “animal welfare does not depend on the size of the farm, but on the breeder “.

But, he said, it’s definitely “easier to take care of animals when you’re smaller.”