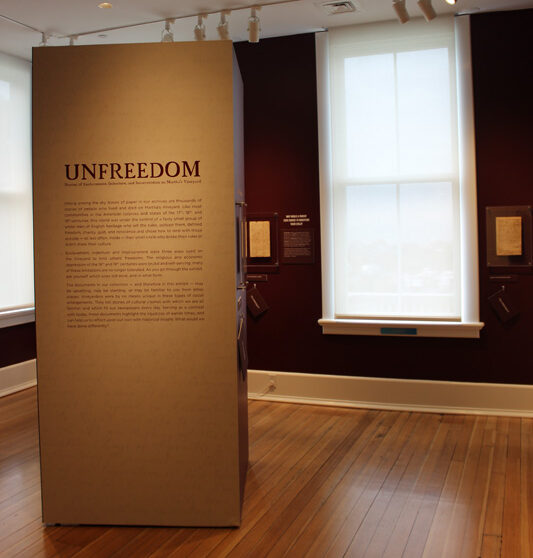 History is usually written by those in power, and museum exhibits often focus on people at the top of the social pyramid with the ability to be masters of their own destiny. The Martha’s Vineyard Museum’s new exhibition, “Unfreedom: Enslavement, Indenture, and Incarceration on Martha’s Vineyard,” uses its time-traveling archive to explore those on the other end of social strata – highlighting people who were not deeply free on the Island.

The show is beautiful, but the subject is in no way pretty. However, it is essential to see that the vineyard was not immune to these problems. The museum’s research librarian, Bow Van Riper, who assisted the exhibition’s guest curator, Dan Elias, explains the origins of the exhibition: “In the aftermath of the events of 2020, we were looking for ways to bring perspective Vineyard’s history to racism and inequality in America. The idea was to use ‘unfreedom’ to explore the experience of being victimized by a legal system that allows some individuals to have power over another. And in a broader sense, to understand what it was like to be a person on the vineyard without power, without autonomy, without the ability to shape your own life as you wish.

The first section is devoted to slavery. It is chilling to read an original bill of sale by 10-year-old boy Peter, sold by Zachheus Mayhew of Edgartown for £150, which spells out in black and white the nature of those who were enslaved for their lives – and that of their children, to infinity, to the owner and his subsequent heirs.

In a real estate inventory, it is sobering to see a human being listed as a “nigger boy” between the listing of a post and a horse. Elias says, “We recognize that these are really explosive documents and will be painful for a lot of people to watch. But it will be interesting to learn that slavery was alive and well in this colony at the beginning of the colonial period and until the Revolution.

Perhaps the most disturbing item is a ship’s manifesto from 1799, long after slavery was effectively outlawed in Massachusetts in 1783. We don’t just see the list of children, wives and men – including the death toll on the journey from Africa to Havana – but how each was sold in staggering numbers. The company responsible for hiring the ship and captain and arranging the sale in Havana was Fales and Athearn. Principal George Athearn was of the Vineyard and an important person as a member of the state legislature, judge, lawyer, and prominent landowner. This handwritten document reveals that even 15 years after slavery was no longer legal, Athearn was still making a lot of money in the slave trade, but not on American shores.

There are exhibits illustrating different forms of servitude, some voluntary, others more punitive and others judicial. Native Americans here on the Vineyard were not often enslaved like people of African descent were in most colonies, and later in early US history. they did not participate in writing, owning land and livestock, and borrowing money, which was basically a new concept to them. They would have financial problems, fines being imposed on them or having to repay loans. They would end up violating all these systems created by the white male power structure. Elias continues: “Because they would end up having to pay a fine or return the money, they would have to pay off the debt or the fine by being under contract – working for someone else with no money for a period of time. .” Usually there was a contract setting out the details, such as the engagement document for Wampanoag wife Beck Pocknossom, who owed Paine Mayhew 25 shillings. Because she could not pay the debt, Pocknossom was contracted to someone for four months, and the wages that would otherwise have been paid to her were paid to her creditor.

Another element reflects the commitment of apprentices. Before there was organized vocational education, if you wanted to be a weaver, sailor, carpenter or miller, you had to apprentice with a master. In the end, you left with knowledge of a trade and two suits, one for everyday and another for Sunday. Although the apprentice may have been willing, Elias says: “It’s striking when you see that they had to commit for seven, eight or nine years or more.”

A harsher form of enlistment was where poor children were taken – sometimes at a very young age, and often offered by their families – to be enlisted for a long period, usually until the age of 21, in as servants of a wealthier. family. This system worked in place of a social safety net. Ellis shares: “What is happening is that wealthy, white, privileged families on the island have found themselves with free labor for many years at the cost of food, housing and education for young people. in a precarious economic situation. Although not as scary as chattel slavery that was practiced before, the indenture continued into the early 20th century.

Elias also dissected information from the Edgartown Jail diaries covering the period from 1789 to 1862. This area of ​​the exhibit, which includes haunting leg chains, delineates the number of whites versus people of color for each reason for incarceration. Among the many telling statistics is that among the prisoners, a third were people of color, while their population on the island as a whole was only 12%.

Elias says he hopes it’s rewarding for people from other groups to see their potential ancestors being talked about on museum walls and to know that those stories are being told, honored and remembered. He concludes: “I really hope someone comes out with an idea of ​​what it might have been like on the streets in the past decade and the failures of the system to treat them like human beings.

“Unfreedom” can be viewed at Martha’s Vineyard Museum until February 12, 2023.