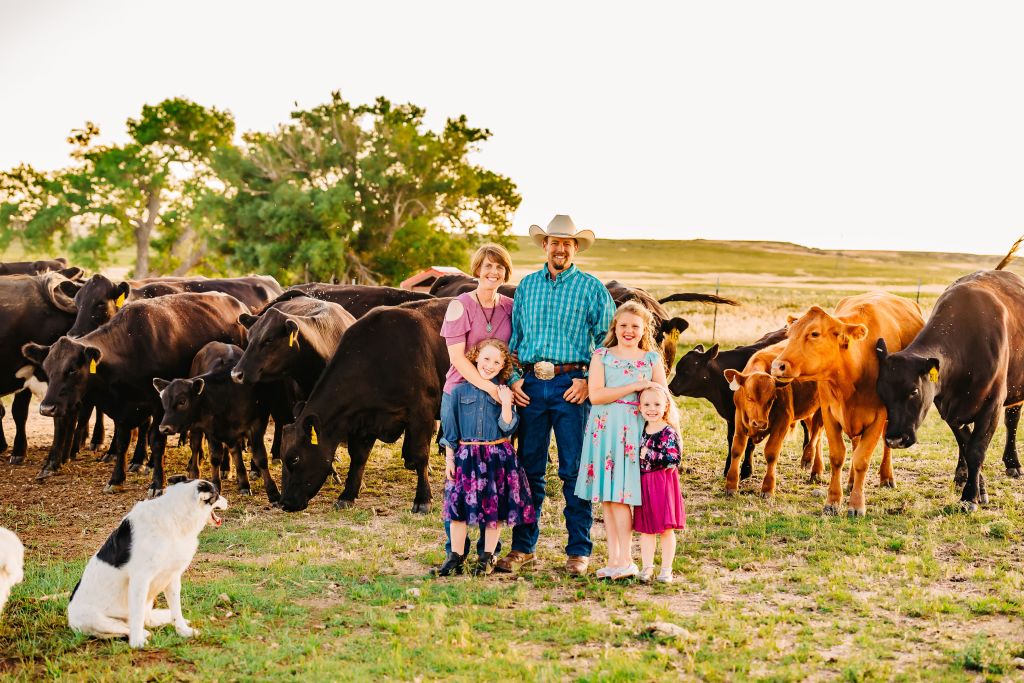 Alyssa Ledingham admits living on her great-grandparents’ ranch presents challenges, but working the land with her husband, John, and raising their daughters in agriculture is an important way of life for their family.

The Ledinghams raise lamb and cattle near Carr. It’s a small operation. Currently, their herd consists of 25 cows and a bull, and they raise and rear 80 sheep.

This year they will harvest 40 sheep and 16 cows for quality cuts of meat, and three more cows will end up in hamburgers because they are too old to produce.

Alyssa appreciates her daughters being able to see the full cycle of life, and by teaching them about farming as a business she is delighted that Ledingham Livestock can provide people with nutritious protein.

“It’s convenient and we interact with our animals on a daily basis. They’re used to being around people – they don’t get upset or fussed if I walk across the field when they’re lying down,” she said.

The fact that the animals are kept in a calm environment is a positive factor as harvest approaches – when the livestock are more stressed, this can affect the quality of the meat. The lambs are harvested between four and eight months. After a year, they are classified as sheep because the meat is tougher.

Older, non-producing cattle will not go through the sale barn at the end of their life, but will go straight to the feed supply, which Ledingham says is less stressful on the animals.

She feels particularly lucky to be able to live in an agricultural environment at a time when land prices are high. When you’re trying to graze cattle for income, it’s difficult, she says. Some of their friends lead agricultural lives, but a secondary circle of friends live in town.

“They have no idea what it’s like to raise animals,” she says.

She and her husband, John Ledingham, grew up around farming. Alyssa’s great-grandparents, Herman and Myrtle Schroeder, established the ranch in 1924, making Ledinghams 4th and 5th generations of Northern Colorado ranchers.

The Schroeders raised chickens to sell to earn money to feed their family as well as dairy cows. Alyssa’s parents bought the ranch from her grandfather and continued to work the land, raising wheat, beef cattle, sheep, quarter horses and golden retrievers for hunting dogs. The couple moved to the ranch in 2013 after selling their home in Wellington. They bought their first sheep in November of the same year and in 2016 invested in 10 cows.

But giving birth and raising animals is hard work.

During lambing it is necessary to keep an eye on the ewes to ensure the lambs are heading in the right direction – normal presentation is front legs first, but lambs may be born upside down and twins can come at the same time, Alyssa explained.

After a lamb is born, ewes sometimes need guidance on how to lick their offspring and get up to suckle. Keeping the animals healthy to survive the work, get them back on their feet and eat within hours requires a lot of energy from the lamb and ewe.

Nursing also takes effort, and most beginners have no idea, she said.

“Especially first-time mothers, they’re a bit stupid, they don’t know what’s going on and might have their lamb and go. We keep an eye on them and put the pair in a pen called a pitcher. A good mother will stay there for a day or two, but a bad mother can take up to four days to bond with her lambs.

The time of year for lambing is traditionally thought to be in the latter months of spring, such as April and May.

But February and March in Ledingham are better because it’s drier. Lambs born in wet and rainy conditions are susceptible to pneumonia. Putting more sheep in barns can generate heat to keep the animals warm, but the humid air can cause air quality issues that lead to lung infections.

Sheep have a gestation period of five months. Through trial and error, the Ledinghams have learned that while they start breeding from mid-September to mid-October, lambing time lands where they need it, starting in February.

Another problem to manage in the work of raising lambs is that of predators. Their livestock guard dog, a Great Pyrenees named Elsa—yes, she’s a big fluffy snow queen—watches coyotes and birds of prey. Hawks and eagles can easily catch a lamb, which weighs about 15 pounds on average; twins typically weigh around 10 pounds.

A huge challenge is the 22-year drought that has plagued Colorado and other southwestern states. Access to affordable pasture is limited, with much of the land resource reserved for feed and hay.

Recently, the Ledinghams pioneered their own fodder system, taking barley or oat seeds and soaking them for 12 to 24 hours for the seeds to germinate. On the seventh day, the result is a cookie – a term for 18 pounds of sprouted grass that can be thrown for sheep to eat.

The sprouts are grown inside a semi-sized storage container and a new batch of food is produced every seven days.

“We’re excited about this new method of feeding,” said Alyssa, which she likens to fresh, green grass. “It’s effective and much cheaper than hay, which is hard to find of good quality and very expensive. Even non-nutritious hay costs $300 a ton, and each sheep eats about six pounds a day.

The work is almost around the clock to keep the herd healthy. It’s a choice Alyssa and her family gladly make, and when you visit her and John at Greeley Farmers Market, it’s clearly a choice that puts a smile on their face.

For more information on ordering lamb or beef from Ledingham Livestock, visit their website or email [email protected]

Whole lambs are available for purchase; deposits for the lamb and beef sections can be made on the website.