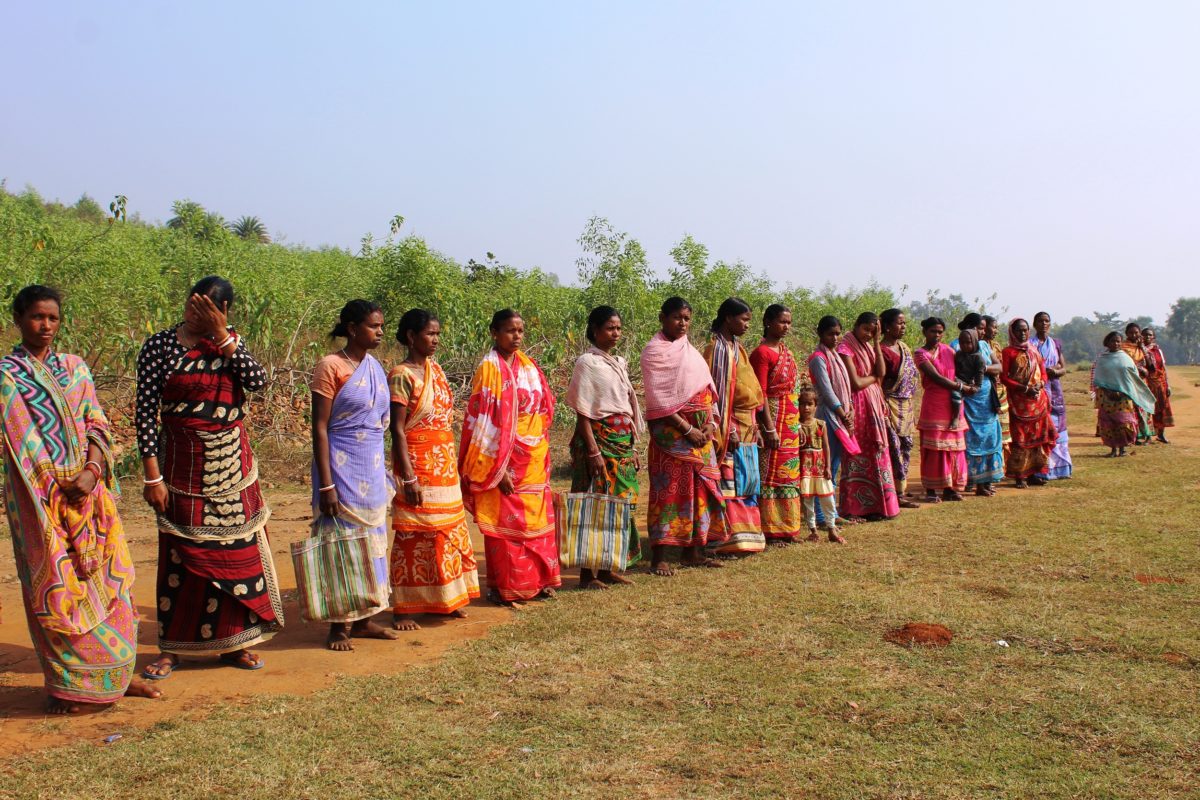 The hamlet of Rinku Gope, Paharkol, located in the Bankura district of West Bengal, has become an attraction for foreigners. This Adivasi woman belonging to the Santhal tribe helped revive a hill believed to be the resting place of the local deity Paharsene.

Once a bare mound in the hamlet of 44 households, it is now a haven of greenery with trees that attract birds and also trap the soil, preventing erosion.

“Everyone here believes that our deity blesses us by bringing monsoon rains during the kharif season when the farmers sow the paddy. So every year we offer worship during the winter harvest festival of Poush Sankranti celebrated in January by visiting the top of the hill to appease him,” Gope told Mongabay-India. While across Bengal the festival is celebrated in homes by making the traditional sweet pithaat Paharkol, women climb to the top of the sacred mound to sacrifice a hen, then cook delicacies as an offering to Paharsene.

Agriculture is the main occupation of Paharkol. Like most farmers in the hamlet, Gope has about two acres of land where she grows paddy in the summer, the dominant crop in the area, and tomatoes and mustard in the winter. The Bankura district in the western part of Bengal and the adjoining Purulia are barren, mostly covered with red earth. A good monsoon is the only hope for small farmers. Even though there is a dam at Paharkol located less than 100 meters away on the Shilabati River, adequate rainfall is required for the dam to be full of water. Gope says she is happy because the water level in the dam rose after the mound was reactivated.

Greening a hill to stop erosion

The Paharkol hill located in the Hirbandh block of Bankura, until three years ago had no vegetation resulting in surface water runoff carrying loose soil and pebbles to the agricultural lands at its edges. feet.

During the 2018 monsoon, restoration work on the mound began, partly to protect farmers’ land but also to re-green Paharsene’s resting place. Following the social forestry model, under a state government program, locals like Gope planted 14,400 sonajhuri saplings (Acacia auriculiformis) trees by digging trenches. The species was chosen because it requires less water to grow and is ideal for arid areas. “Planting trees on the mound moistened the soil in the whole area, thus stopping the erosion,” said Gope, who received training from an NGO, PRADAN, which was implementing the project.

Now birds like Indian myna, spotted dove, Asian koel, and eagles are more commonly seen in the mound. Even cattle climb the mound in search of food, Gope added.

Sonajhuri or Acacia auriculiformis is an alien plant species endemic to Australia, Papua New Guinea and Indonesia. Although not native to India, it has been accepted since the early 1940s. It is licensed for planting by the Forest Department for social forestry and for planting under MGNREGS, according to PRADAN, which has noted that the local community was consulted and that this tree species was selected because of its hardiness in the particular terrain and the monetary value of the wood. from which the community benefits.

According to former Wildlife Research and Conservation Society (WRCS) forestry officer Jayant Kulkarni, sonajhuri, like eucalyptus, is a non-native tree, known as an exotic tree. However, he says, “Planting is better than not planting. Acacia is easy to plant and gives good results. Sensitive plants may die and give poor results. People’s acceptance is important. That said, PRADAN should explore hardy native species for tree planting.

Land treatment under the Usharmukti program

In 2017, the government of West Bengal launched the Usharmukti scheme for the implementation of the central government’s MGNREGA, a rural employment guarantee scheme. Under this, the objective was to process the barren lands and turn them into productive assets in the Jangalmahal (Jungle Estates) region which had been affected by the Maoist insurgency. Jangalmahal, spread across Bankura, Purulia, Birbhum and West Midnapore districts of West Bengal, has mostly tribal people living there. By focusing on land treatment or revitalization, the program aimed to create livelihood opportunities, which in turn would reduce the migration of people out of the area in search of jobs.

The non-profit association PRADAN is the technical partner of Usharmukti in Bengal. Working with the Bankura State government, the organization helped treat 9.5 hectares of land in the hills region. Himadri Das, Paharkol reforestation project manager for PRADAN, said the non-profit organization works with communities through village meetings on watershed management.

Planning was done in fiscal year 2017-18 and implementation began in 2018-19 to revive the mound. Apart from the planting of sonajhuri trees on the mound, the fallow land surrounding it was also covered with horticultural species such as mango, to provide livelihood for the inhabitants. Planting work in fallow land took place to some extent in 2019-20, 2020-21 and 2021-22. A bit of planning is also underway for the 2022-23 fiscal year. Currently, 10 hectares are under mango orchard with 3,600 trees. More than 15,000 mango trees that were planted on 60 hectares of land before did not survive.

PRADAN staff, Niladri Giri, who works on livelihoods, told Mongabay-India that people can reap economic benefits from sonajhuri trees in the form of timber and firewood within five to six years of planting. Those who worked in the mound restoration project received a salary under the MGNREGA.

Social forestry has many objectives, the most important being the protection of agricultural fields against wind and soil erosion. Other goals are to provide recreational facilities and reduce people’s dependence on forest resources. India was one of the first countries to experiment with social forestry and it is a major component of the country’s forest policy. The term was first used in 1976 by the National Commission for Agriculture.

Attempts to reforest the hills have been made in Telangana, Meghalaya and even outside India in Vietnam. But the case of Bankura is different as agriculture forms the backbone of the economy in Bengal, and in Paharkol the farmland has been damaged by collapsing soil and gravel due to erosion.

Paharkol falls under the village of Guniada in the Khatra sub-division of Bankura. Subdivision Officer Maitri Chakraborty is happy that the Paharkol Hill Revitalization Project has succeeded in stopping soil erosion in a tribal hamlet, thereby benefiting poor marginal farmers. Many of them turn to cauliflower to supplement their income during the winters. Across Bankura, the water crisis is making farming difficult. But the effort to revive the hills has reversed the fortunes of farmers by raising groundwater levels.

“There were few trees earlier in the whole hamlet. About 170 men and women worked according to our plan and helped to cover not only the hill but also the drought-prone highlands with plantations,” Giri from PRADAN added.

Editor’s note: The story was updated March 21 with additional insight from an expert on the use of non-native sonajhuri trees.

Banner image: Women in the hamlet of Paharkol have planted over 14,000 sonajhuri trees in an attempt to stop soil erosion. The base of the mound also has about 20,000 trees all around. Photo courtesy PRADAN.