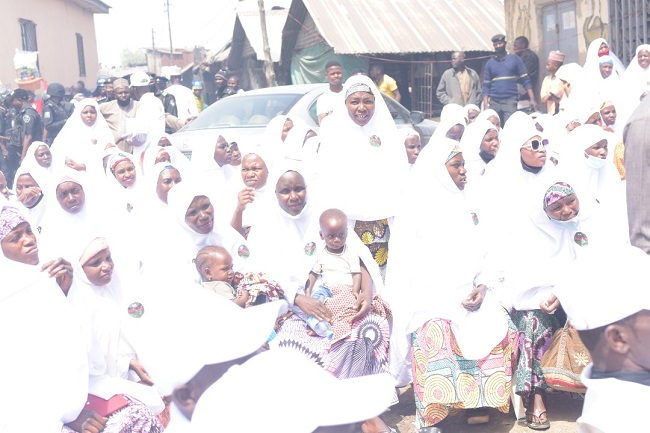 The National Agricultural Land Development Authority (NALDA) under its empowerment programs has empowered 300 people including rehabilitated drug addicts, women and youths in Kano with livestock.

NALDA in collaboration with National Drug Enforcement Agency (NDLEA) and Salamah Youth Empowerment and Enlightenment Initiative distributed 300 goats to 100 women, 100 cows to 200 youths at Central Abattoir, Kofarmazugal, Kano, while pledging that the first phase of the exercise will be completed in March this year.

In the program, one hundred women got three goats each while two hundred young people received one cow for every two people.

Beneficiaries would be trained on animal husbandry and financial capacity to improve their ability to run the business.

“An organization that rehabilitates children from drugs organizes them for empowerment, if they are left without empowerment they will return to drug use.

And it is in President Muhammadu Buhari’s interest to ensure that we reduce drug addiction and create jobs in the country. So it’s a way of keeping them away from drugs and involving them in a meaningful way.

“We have empowered the first 300, the remaining 200 will soon be completed in the first phase in Kano by March. This will be done in different states, and we want to encourage other organizations to reach out to these addicts in order to rehabilitate them and NALDA will engage them in meaningful livelihood opportunities through agricultural value chains,” he said. declared.

Moreover, Ikonne said “in the next three months, they would have sold the cows and the money put in the survey, and another set of cows will be given to them, so the profit goes to them and the capital is reinvested. is why doing it in a cluster with an organization is best.

“But for the women who are given goats, we will raise it for six months to a year depending on the size of the goat but our main interest is on those who have been rehabilitated, that is to say the young people from the slaughterhouse, they are the ones we are looking for”.

Initiator of Salamah Youth Empowerment and Enlightenment Initiative, Senator Naja’tu Bala Muhammed representing Kano Central Senatorial District, while praising the intervention of NALDA, said the intervention was the best ever by a parastatal in Kano.

According to her, “I have spoken a lot against this government of President Buhari but I realize that it is necessary that I also initiate the change that I dream of. Then I initiated this program with the NDLEA to rehabilitate our young people who used to be drug addicts, but we realized that if we are to give them hope, we have to show them that there is light at the end of the tunnel by engaging them in a meaningful way.

“They went through training, after which I empower them with the little funds we have, but thank goodness the president finally saw that by introducing us to NALDA.

“I have to say that NALDA as far as the people of Kano are concerned is the best parastatal in the country, we have never seen a parastatal in Nigeria with such a direct impact on the masses.

“The beneficiaries will be trained by a teacher and they will be followed for the next three months as they give them training on animal husbandry and finance,” she said.

Alhaji Isah Mahammed, Commander of NDLEA in Kano, while commending NALDA for the initiative, said that idleness among young people has been found to be one of the major causes of drug addiction.

“Anyone who doesn’t have a source of income will definitely look for something that will make them forget about their lack of vocation and most of the time they turn to drugs. This initiative of NALDA with the support of the President and the Salamah Foundation, which has seen the young people given livelihoods, their focus will now be on the means of survival given to them.

“With this, they would now go about their business while turning away from drugs, which is why the NDLEA is pleased to partner with the Authority to ensure that drug abuse is mitigated among young people. .

“We hope NALDA will continue to help as the intention is to empower 500 people and as it is like a loan they would be under pressure to pass and then others could be encouraged to benefit,” he said. -he declares.

One of the beneficiaries, Mr. Alima Adamu, who spoke in Hausa, appreciated NALDA and the foundation of the initiative, saying that with the cow, he can now enjoy a new financial breath.

He, however, called on more organizations to emulate this gesture as more young people need such empowerment to enable them to earn a living and get rid of drug addiction.

YOU SHOULD NOT MISS THESE TITLES FROM NIGERIAN TRIBUNE