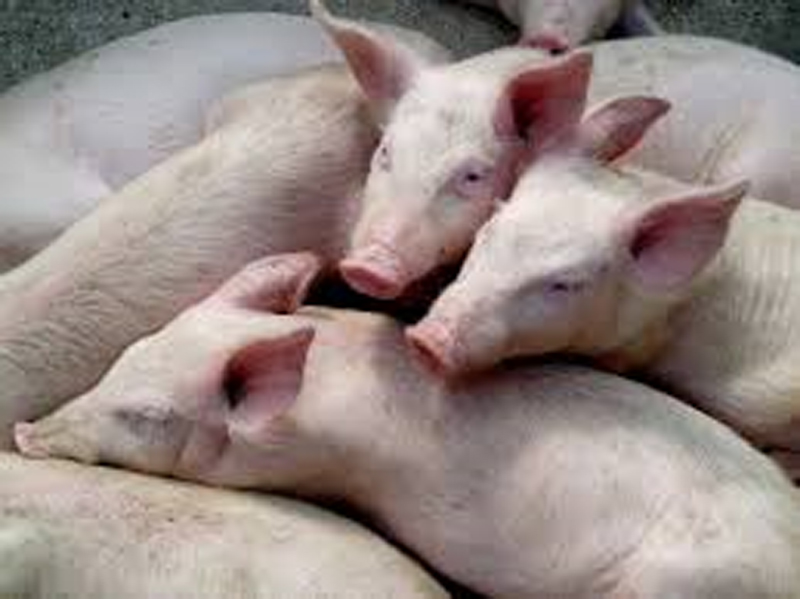 Aizawl / IBNS: Mizoram Minister of Livestock and Veterinary Affairs Dr K Beichhua on Thursday visited Lungsen village, the site of the current swine fever crisis that has claimed the lives of 276 pigs since March 21st.

In a short meeting held at the RD nursing home, Minister AH & Vety thanked officials, VCs and NGOs for their tireless efforts to contain the virus since the outbreak of March 21. Measures to contain the spread of the highly infectious virus must be continued on a war footing, he added.

The minister handed over cash assistance of Rs. 20,000 each to the three YMA branches in Lungsen village. The three branches have each set up separate cemeteries on the outskirts of Lungsen village, with volunteers coming out for mass burials at designated times.

Due to the daily increase in pig deaths, JCB Earthmovers was used to pre-dig burial pits on these cemeteries. The minister and his team visited these burial sites, inspecting the safety measures taken during the burial of the pig carcass.

A five-member disease investigation team from Aizawl, led by Dr. M Zohmingthangi, deputy director of AH & Vety (Disease Investigation and Epidemiology) has been camping in the village since April 5.

The team is studying the situation on the ground and educating villagers in and around Lungsen village on the various precautionary measures to be taken in the midst of the crisis, including the proper method of burying infected pig carcasses and the importance of cleaning and disinfection.

The team also distributed gloves, sodium hypochlorite, potassium permanganate and cash assistance of Rs. 7,000 each to the 3 YMA branches in Lungsen village.

The infected pigs in Lungsen village developed symptoms such as vomiting, lethargy, anorexia, bluish discoloration of the abdomen and fever. These symptoms are indicative of AFS according to AH & Vety officials.

The first pig death was reported in Lungsen on March 21. Chief veterinarian Tlabung received the information on March 25 and immediately took action, collecting tissue and serum samples from the dead pigs which were then tested at the AH & Vety epidemiological center, Khata and the Department of pathology, College of Veterinary and Livestock Sciences, Selesih.

Samples were tested using enzyme-linked immunosorbent assay (ELISA) and polymerase chain reaction (PCR), and tested negative for porcine reproductive and respiratory syndrome (PRRS) and swine fever classic (PPC). According to AH & Vety officials, preliminary tests indicated that African swine fever (ASF) was the leading cause of pig deaths in Lungsen. Tissue and blood samples were sent on April 7 to the National Institute for High Security Animal Diseases (NIHSAD) in Bhopal for confirmatory testing.

Although ASF remains to be confirmed, measures are being taken in accordance with the ASF Prevention and Containment National Action Plan.

Tlabung’s Chief Veterinarian (CVO), Dr K.Lalhlimpui, had declared Lungsen on April 1 as an “infected zone” under section 20 of the Infectious Disease Prevention and Control Act 2009 and contagious in animals.

Tlabung SDO (C) and BDO Lungsen Pu Lalsanglura also issued a restraining order under Article 144 of the CrPC for two months from April 2. The ordinance prohibits the movement of pigs to and from the village of Lungsen.

Ensure a sufficient quantity of fodder for the livestock: responsible for the breeding

Department of Animal Husbandry Signs Memorandum of Understanding with Digital…