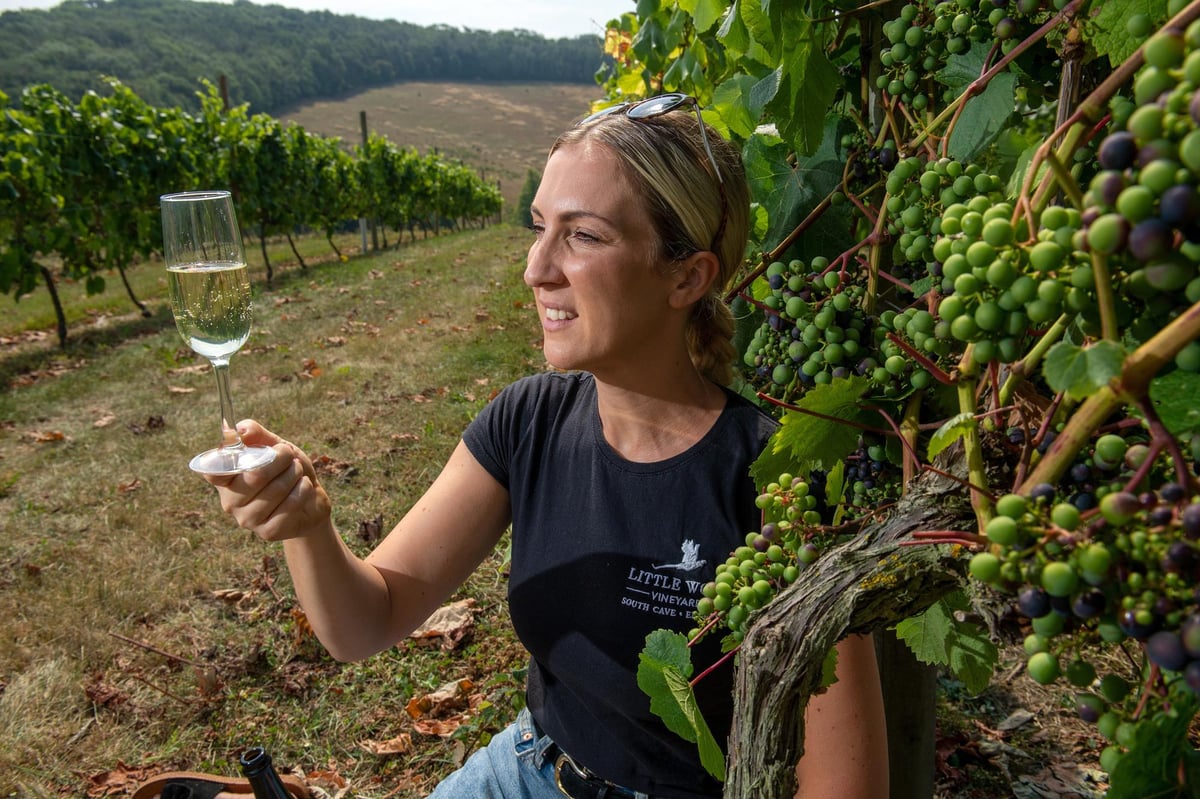 It was established in 2012 by a family that has operated the village for three generations and made the brave decision to diversify from traditional agriculture and livestock to wine production.

The Wilson family’s bet appears to have paid off as they have since won a string of awards for their growing range of wines, as well as developing a popular wedding and events venue on the same site.

Little Wold Vineyard at South Cave in East Yorkshire. Alice Maltby with one of their sparkling wines in the middle of the vines.

Henry Wilson, whose father Robert bought Market Place Farm in the village in 1947 when the nearby Cave Castle estate was divided and sold, got the idea for growing vines during a visit to South Africa .

Back home, he researched and sought advice from Stewart Smith, a vine expert based in Malton, North Yorkshire. Stewart visited Henry’s farm and gave the exciting project a big boost.

Henry’s daughter, Alice Maltby, explains: “Much of the farm is made up of steep limestone hillsides, which are useless for cultivation and difficult for livestock. We had to find a use for them – it was either that or resell them.

“Soil samples were taken and we planted a number of different varieties to see what worked well. These included familiar varieties, such as Chardonnay and Pinot Noir, as well as more typically English varieties, such as Rondo, Madeleine Angevine and Solaris.

Little Wold Vineyard at South Cave in East Yorkshire. Alice Maltby with her brother Tom Wilson and her father Henry Wilson among the vines.

The first 2,000 vines were planted in the spring of 2012 and, to keep costs down, everything was done by hand.

Alice recalls: “Dad chose a plot out of sight, just in case anything went wrong, but it turned out to be the best thing we could have done as the views from the site are something Special.”

For the first three years, everything that grew, including the grapes, had to be cut and thrown away. This was necessary to develop the rootstock and promote the absorption by the vine of the chalky minerals of the “terroir”, the essential set of environmental factors that give the wine its unique character.

“We knew there would be no income from the vineyard for the first five years, so we had to do other things to fill the void.

Little Wold Vineyard at South Cave in East Yorkshire. Tom Wilson and his father Henry Wilson among the vines.

“Getting to the point where we were producing our own wine was the result of years of hard work,” says Alice.

It wasn’t until 2016 that the Wilson family was able to harvest their first full crop of grapes.

“Our 2016 harvest turned out to be our first real winemaker; our Barley Hill White and Poppy Hill Rosé were bottled in 2017 and won their first prize later that year.

The family now own 20,000 vines, most of which are at their main South Cave site, although they now also run vineyards in Lincolnshire and South Yorkshire, which has allowed them to significantly increase their yield in grapes until some of their own newly planted vines have time to settle.

Alice Maltby with her brother Tom Wilson and her father Henry Wilson among the vines.

As the vineyard grew, the Wilson family experimented with a wider range of grape varieties and now produce red and sparkling wines, as well as their white and rosé wines.

Although the Covid-19 pandemic has severely affected Little Wold Vineyard’s ability to hold events and their wholesale wine business to restaurants and other venues, it has provided a unique opportunity for the family to embark on a project. of major construction.

They seized the opportunity to expand their tasting room, which now allows them to hold events year-round, as well as investing in the development of their own on-site winery.

“The lockdown could have been sink or swim; in addition to being a major source of revenue, our events are an important outlet for our wines, so we have been doubly affected by the lockdown restrictions,” says Alice.

“We had to try to do our best with what we had. We realized that while the marquee where we hosted weddings and events was great, it was a bit limiting, so we managed to build the extension during a time when we couldn’t really be in business. in any event.

Small wines from the Wold.

“Having the new, larger tasting room means we can now offer weddings, wine tastings and other events throughout the year, rather than just during the summer months.”

To keep the business running until restrictions aimed at limiting the spread of Covid-19 were eased, the Wilsons focused on online wine sales and began hosting online tasting events, decanting their wines in smaller tasting bottles and distributing them to customers across the UK.

“With major weddings, tastings and tours cancelled, we had to adapt quickly not really knowing what the future held. of Covid.

Alice and Tom have also taken advantage of the unexpected break from their usual activities to work towards professional qualifications in winemaking.

This means they will be producing their own wines at their brand new cellar in South Cave for the first time when the 2022 grapes are harvested from late September.

Their grapes were previously made into wine at a third site in the Midlands.

Alice explains: “Developing the winery involved building a new hangar, buying all the equipment and applying for various licenses and permits etc.

“It was a huge investment and a lot of work. Tom and I will be working together on the wine side but, for the first year, we will have the support of a consultant.

“It’s an important step in our journey. From an environmental and quality point of view, it’s the right thing to do.”

Meanwhile, Alice won the New Business and Overall Winner titles at the Women in Business Hull’s Annual Women of Achievement Awards in 2018 in recognition of her role in building the family vineyard and juggling her workload with the demands of work. raising his young family.

The Cellar Door Shop at Little Wold Vineyard is now open to the public Fridays and Sundays, 11 a.m. to 4 p.m.

It serves coffee, cakes and, of course, wine, while giving visitors a great vantage point to admire the vineyards where the grapes are grown.

Customers can also buy bottles of wine and other gifts to take home.

Down 19%, is it safe to invest in the stock market now?