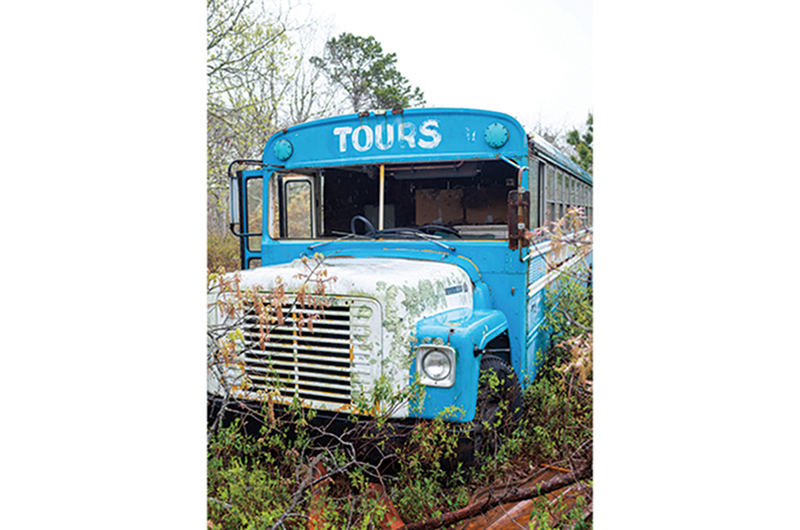 The contents of the bus, in turn, can be traced back to one of the most historic homes on the island: the Mayhew-Hancock-Mitchell House.

For more than twenty years, a blue and white bus stuffed with kitchen utensils, books and old furniture sat abandoned in a heavily wooded lot half a mile from our house near Quansoo. Three 21st-century Tom Sawyers – thirteen-year-old grandson Matty and two of his pals – climb through dense brush and oak trees to explore the bus. Matty reports that the back door was kicked in and an upright piano in the back of the bus was badly damaged in the rain.

I visit to see if there is anything I can do to protect the piano and other contents. The front door of the bus and several side windows are open to the elements. I can’t close the back door. On the back, I notice the edge of a cracked picture frame. It contains twenty-one family photos. Why not return the photos to the owner and, along the way, learn the history of the abandoned bus?

Enter Larry Hepler, the unofficial Quansoo historian. Hepler tells a story that connects the bus to one of the island’s most colorful characters, Clarence A. “Trip” Barnes III. A mover, used-car salesman, matchless auctioneer for good causes, and winner of good citizenship awards, Barnes was referred to in this magazine as “one and only, descended on one side from a Massachusetts attorney general and on the other related to PT Barnum.The PT Barnum in him can help explain one of Trip’s greatest shows on Earth: removing a fleet of buses from their seats and turning them into lucrative mobile storage units.

The contents of the bus, in turn, can be traced to one of the most historic houses on the island: the Mayhew-Hancock-Mitchell House, a Quansoo farm which, according to family tradition, was built by Thomas Mayhew Jr. to serve as his residence and a meeting house for the Native Americans he converted to Christianity. (Mayhew Jr.’s father “purchased” the island in 1641.)

Ownership of the house passed to the Hancocks, including Samuel Hancock, captain of merchant ships engaged in the transatlantic trade, and then to the Mitchells, who operated whalers and, in the 20th century, farmed. Adelbert “Delly” Mitchell and his wife, Iva Maye West Mitchell, raised one hundred sheep, twenty-five cows and five children there. Delly died in 1939. In 1970, Iva Maye negotiated the sale of the property to Florence B. “Flipper” Harris, an Island conservationist who purchased the property for the sole purpose of turning it over to the Sheriff’s Meadow Foundation.

Under the terms of the agreement, Harris allowed the Mitchell family to continue living seasonally in the house until 2000, as long as they did not alter or update the structure. Leslie Cosgrove, granddaughter of Delly and Iva Maye Mitchell and one of the last people to live in the house, fondly remembers her fifty years there, despite the lack of electricity and indoor plumbing. “It’s a peaceful place,” she says. “I am grateful to the Lord for the time I spent there.”

In 2000, upon leaving home, Clarence A. Barnes III Moving & Storage was hired to load the Cosgrove family’s belongings onto a bus and drive it about a mile away through an undeveloped 6-mile wooded lot. .6 acres she owned. Barnes does not recall charging Cosgrove for the bus rental in years. “I felt guilty for charging him,” he said. As for Cosgrove, she always thought she would build on her land when she retired and create new space for her family’s possessions. More than two decades have passed. Cosgrove says she hasn’t returned to the vineyard since leaving in 2000.

Maybe she will never come back. She is busy overseeing repairs to the kitchen and bathroom of her home in Pleasant Valley, Connecticut, built in 1850, and coordinating long-term restoration projects at First Congregational Church in Barkhamsted, Connecticut. When I mail her the photos I found on the bus and a new book about the ancient history of her family’s farm, she sends me a handmade thank you card. On the front is a photo of a Quansoo sunset.

I am thrilled with the Sheriff’s Meadow Foundation’s million dollar restoration of the Mayhew-Hancock-Mitchell House and the Foundation’s stewardship of the farm.

But I am saddened by the sight of the bus. Its content is falling apart. Kitchen utensils and other objects, having been removed from the bus, are lying on the ground, deteriorating and decomposing.

It reminds me of David R. Foster’s book A Meeting of Land and Sea (Yale University Press, 2017). In attempting to determine the future of the vineyard, Foster suggests that a rusting ruin of a car behind Arrowhead Farm in West Tisbury and a 1960s bathtub sitting in the state forest could provide us with a way to “gain new perspective on the island and on ourselves”. .” Perhaps the abandoned bus also asks us to consider humans’ complacency with the environment.

Others see the bus a little differently. A scorer says the bus “is an eyesore and a place for vermin to roost and breed. It would be great to get rid of it. Neighborhood kids, however, find the bus an appealing mix of mold, mildew, and mystery. Rosie, my eight-year-old granddaughter, offers a one-word review: “Cool! »