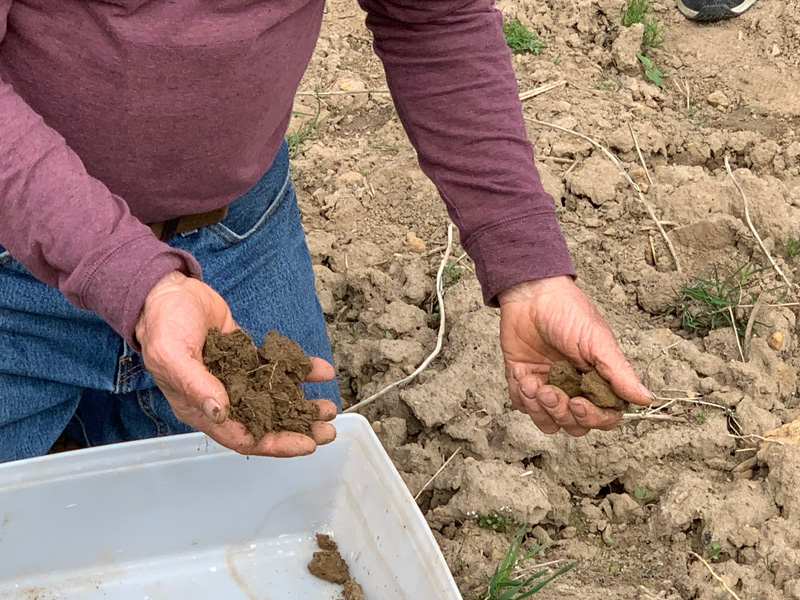 The Island Grown Initiative (IGI) uses a farming method called “regenerative agriculture” to combat climate change and enrich the soil. These methods were showcased during a recent tour of IGI’s 40-acre Tisbury farm as part of Climate Action Week.

“From a climate perspective, regenerative agriculture is one of those amazing things that’s a huge global solution to one of the biggest drivers of climate change, which has been how we’ve grown, shipped , ate and wasted our food. It’s also a really concrete and immediate solution that we can apply from our backyards to our local farms,” said Noli Taylor, Senior Director of Programs at IGI.

Taylor said the farm is one of IGI’s programs supporting low-income islanders and making food “accessible to everyone.” Most of the crops from the farm go to Island Pantry or for IGI’s Mobile Farmer’s Market.

IGI Regenerative Agriculture Consultant Andrew Woodruff and Soil Health Researcher Alli Fish led the tour. “40% of the world’s land is devoted to agriculture and it’s a huge responsibility, how we use that 40%,” Woodruff said. “The vast majority of this is not handled well and this movement is imperative to our existence on the planet.”

Woodruff admits he was guilty of soil-damaging agriculture during his decades as a farmer on the island. Four years ago, when Woodruff was planning to retire, IGI approached him to work with him because he was using regenerative agriculture techniques on some plots of land he was renting.

“It felt like the right thing to do,” Woodruff said. “Four years later, the fields are recovering from excessive tillage, which I have been a big part of, and other destructive farming practices over the past 30 or 40 years”

After leading the group to a patch of land filled with plants, Woodruff said he “first wanted to recognize the indigenous people” who practiced sustainable agriculture before the introduction of modern farming techniques. Woodruff went on to explain the regenerative agriculture technique used by IGI, which implements cover crops.

According to the UMass Extension Center for Agriculture, cover crops are plants “grown for the purpose of preventing erosion, improving soil structure, maintaining or improving soil fertility, and suppressing the growth of weeds and certain soil-borne plant diseases”. IGI’s farm uses crops such as field peas and winter rye. Once the planting season arrives, cover crops, as well as weeds, are killed by breaking the stem. A sharp, no-till machine is used to “dig small trenches in the ground” for planting cash crops. Woodruff said adding a little mulch or other organic matter, like chopped oak leaves, can help provide the seeds with nutrients and protection. A cover, such as a tarp, can be used to help kill weeds to make room for cash crops.

“Think about making lasagna. You want to keep layering the system and you want to keep adding layers,” Woodruff said. He added that an underground network of fungi, bacteria and roots forms in the process, improving the relationship between crops and soil.

Fish told The Times that IGI follows the main principles of regenerative agriculture to help crops and soil thrive: maximize soil cover, minimize disturbance, maximize biodiversity, and maximize the presence of living roots. Another principle that Fish uses to maximize biodiversity is to implement livestock in the cultivation of vegetables.

Another reason to keep the soil healthy was nitrogen production, according to Fish.

“On those roots there are tiny little nodules,” Fish said, pointing to the field peas. “These nodules are what fix nitrogen for the legumes and the host bacteria that live there are what fix the nitrogen and exude it into the soil around it and use some of it for itself because all the plants need nitrogen.”

Additionally, nitrogen retention can minimize the use of synthetic fertilizers. According to Fish, tilling the soil removes “pounds and pounds” of nitrogen, and the nutrient remains in leaves and fruit on many farms.

“That’s also why animal rotation is so important,” Fish said, citing the nitrogen-rich droppings of chickens and the “natural tiller” roles of pigs as examples.

“I’ve never heard of a farmer who didn’t like it and grew more than he ever had before,” Woodruff said. However, he acknowledged that there can be challenges to conversion, whether they are financial or there is a lack of information.

“[We’ve] were able to vote for candidates who want to invest taxpayers’ money in regenerative agriculture. We’re already pouring billions of taxpayer dollars into the wrong kind of agriculture, but if we could just redirect that funding to farmers making this transition, that would be a huge win,” Taylor said.