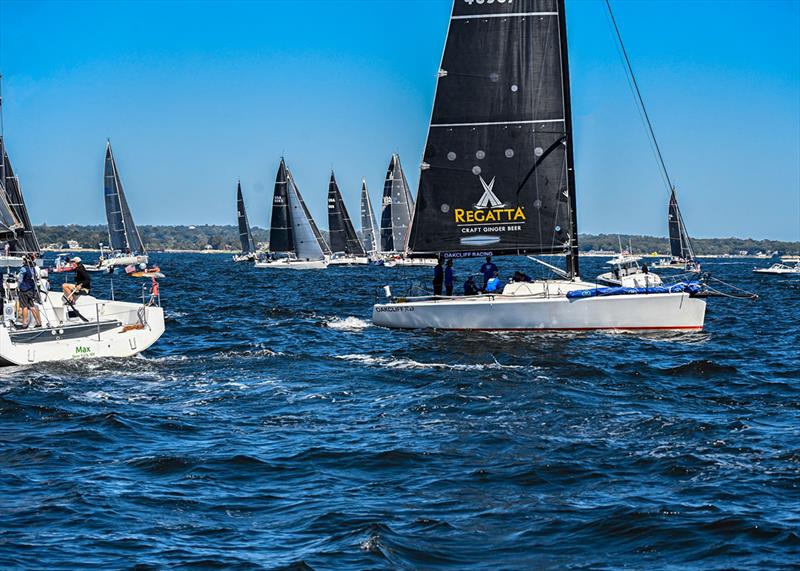 The annual Labor Day weekend offshore classic in late summer – the Vineyard Race – saw the small armada of J/Teams do well in the three races that make up the event, winning five divisions in total the podium in the eight J/Boats divisions were entered! Organized by the Stamford Yacht Club, the three races started on time Friday evening September 2, 2022.

The three races were:

Race of the vines

Sixty-six boats were entered in this race, including 21 J/Teams (32% of the fleet). The big story was the dominance of the J/111s sailing in the ORC and PHRF divisions and the fact that the J/Teams won FOUR of the ORC/PHRF divisions! More on that in a moment.

In the six-boat ORC 6 Double class, both J/Crews rode some very tough races. In their ongoing battle all summer, David Rosow’s J/109 LOKI took silver, while their friends from the J/105 YOUNG AMERICAN 146 – Peter Becker & Adrien Blanc – ended up winning the bronze medal.

The fourteen-boat PHRF 8 class was blitzed by John Greifzu’s J/109 GROWTH SPURT, winning her class with over 1:20 corrected time! Most of the fleet finished well over 2-3 hours of elapsed time behind them late Saturday night. Fourth place goes to J/99 THIN MAN by Todd Aven.

The ten-boat PHRF 9 class was given a 1-2 sweep by talented J/Crews. The winner was William Ingraham’s J/124 TENEBRAE, followed by Arthur Hanlon’s J/112E DAUNTLESS in second place. The two J/120s battled hard during their more than 30 hours of racing, finishing about 5 minutes apart! The winner of this cage match was CHARLOTTE YC of Richard West against SPECK of Bill Klein, respectively 5th and 6th in his class.

The nine-boat ORC 10 class was shaped (or perhaps badly spanked) by Andrew Berdon’s J/111 SUMMER STORM. By finishing on Saturday at 3:40 p.m., they gain an hour in corrected time and simply smoke out the Italia 11.98, XP 38 and JPK 1080 teams who had finished more than two hours behind them! Notably, all three of SUMMER STORM’s competitors had the ambition and talent to win the race…as they had done for most of the summer on the offshore northeast circuit.

The half-dozen boats in the PHRF 11 class witnessed a complete roundup of the podium by J/Crews! Like their ORC 10 classmates, Bill & Jackie Baxter’s J/111 FIREBALL also smoked their class, winning by 40 minutes of corrected time. The second was the huge family crew of the J/130 BLITZEN, piloted by the incredibly talented Storck family of Huntington, NY. The Storcks are famous for winning J/80 North Americans, J/80 Midwinters and many other J/80 events over time. The J/133 RHIANNON of Cao Deambrosio and Chris Nichols completed the podium to win the bronze medal. Constantine Baris’ J/122 DIRE WOLF completed the total sweep of the top four!

The shortest race of the three, this race had three divisions. Once again, J/Crews made it to the podium in every division they entered, an impressive feat! The winning boat in the PHRF 1 double-handed class was Hamish & Lauren Young’s J/24 JAMALA! They completed the course in 30h 53min and corrected for a class victory in just 3 minutes!

In the PHRF 3 division, the J/92 VIXEN of EJ Haskell & Jim Weil won the silver medal, while their colleagues from the J/30 BOUNCE, skippered by Blaine Davis, won the bronze medal! A great show overall for J/Teams in the Cornfield Point race!