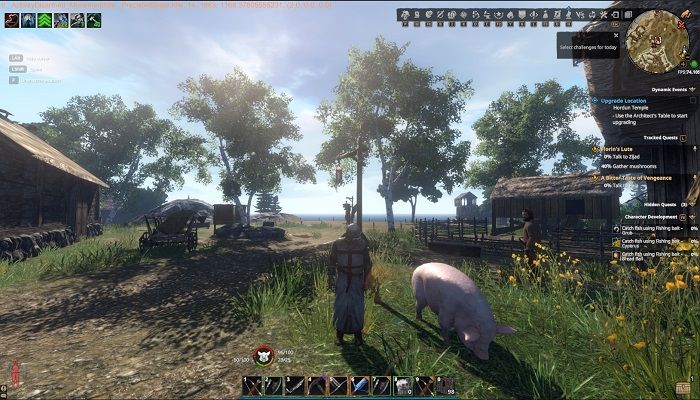 Every week, we scour the internet for all things indie MMOs, so you don’t have to. In this week’s news, farmers can now raise animals alongside their crops, prospectors get a new map to explore, and several alpha and beta tests are planned for next month. There’s a lot of other stuff going on as well, so let’s stop wasting time and get started with this week’s MMO Indie Spotlight.

Seeing the caption “The grind is real” on this week’s Twitter post sent shivers down my spine. Luckily, the thumbnail clarified that the grind was about making bread, not the typical MMO grind I was thinking.

The grind is real. pic.twitter.com/G2zYu5Cb4W

In the same way Tech Blog 14a new position on the BoT The Steam page outlines some upcoming changes to train and ship travel.

It was a busy Thursday for Chimeraland. Along with the server maintenance, a new server, IceRiver, has been added to the Americas server pool. Thursday also marked the start of the Draconic Galactica Treasure Hunt event.

A free open beta is coming to Cinderstone online. The beta will run from September 1-8. Players will be able to try out three classes up to level 20 by putting them to the test in the first main story chapter and two party dungeons. You will also be able to unlock and explore 2 open world maps and a capital city. And don’t forget to test out the new systems the development team has been working on, including the crafting system, caravans, node events, and the siege system.

Season 2 of The Cycle: Frontier be there soon! Along with several other updates, the new season will have a third map, Tharis Island, for players to explore, exploit, and dominate.

As mentioned in last week’s IMS, Ask Aphelia #14 was released on Thursday. The Q&A podcast was dedicated to answering many of the community’s questions about the upcoming FROM launch. In addition to the podcast, Novaquark published a guide to help players prepare for the upcoming reset.

According to several announcements on Ember Sword Discord, Bright Star Studios is gearing up for the next stage of global growth. This includes an updated management team, with co-founder Joris Huijbregts taking on the role of Chief Development Office. Other key roles have been filled by industry veterans from brands like Blizzard, Riot Games, King, and more. You can get all the details from the Press release.

Siege Camp has announced that it will hold a live broadcast on the foxhole Twitch Channel. The stream is scheduled for Wednesday, September 7 at 2:00 p.m. EDT to reveal the 1.0 update. The 1.0 FAQs was updated before the stream.

There will be a Free Play Weekend September 2-5. Special weekend events will include the Problem with obsidian breaking appearance event. This is a perfect opportunity to try fractured online before his Early Access Release September 15. And while you eagerly await the free play event, be sure to watch the replay of the Council of the Elysée Chapter 9.

With Weekly Update 331, players can now add animals to their farms through the new breeding system. The update also includes a preview video of the upcoming improved daytime and nighttime visuals, as well as numerous quality of life updates.

There have been some minor changes to the $ARIA listing schedule to align the DEX and CEX listings. You can get all the details in this blog post.

Crazy world will have his first closed betast from September 15 to 21. In the meantime, be sure to check out the new Crazy world Gamescom 2022 Trailer!

Legacy of the Mist

Version 0.1.25.0 went live on Thursday. You can find the patch notes on the Legacy of the Mist Steam page.

With server issues and other bug reports during the current Open Alpha testing, Icy North Games has announced that it will be delaying The past fate Early access version. The new release date should be announced after the end of the Open Alpha.

INSANE shows they have skin in the game. A tweet this week showed the work that went into conceptualizing many of the skins being developed for Profane.

SKINS! ??Hey, homies. Today we wanted to show you some of the process and effort it takes to conceptualize many different skins for Profane. pic.twitter.com/DPWal1kTWb

Michi talks about server performance and faction contracts in Dev Diary #349while Nick worked on the game’s pricing pages.

Kingdom of the Mad God

After reviewing data from the past two weeks, DECA Games is fine-tuning the experience needed to complete all 78 Battlepass levels.

Beast Burst Entertainment has been busy updating the Gallery Pages on the Honor scars to place. Along with cool wallpapers, there are updated game templates for existing races, including new pages for Bearan and Gronthar races.

A new betting system was announced this week. Among the changes are a new user interface, multiple lockout durations, and reduced fees. There is also an update Meekolony guide to staking to reflect the changes. And don’t forget to check out the Weekly blog For the others Tatsumeeko news and updates.

Equinox 2022 goes live this week. The event area, The Oases of Anuk’Amon, will have new outfits, 20 unique hidden chests to find, and lots of other changes to be discovered by the players.