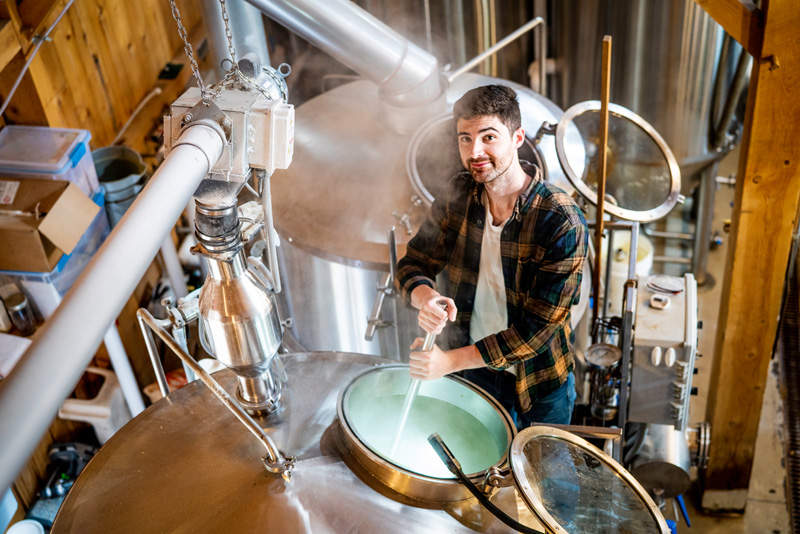 The fun fall flavors have arrived at Bad Martha Brewing Co., and guess who learned how they’re made? Yes, you guessed it – me. Once again, I got to do something pretty cool for the “Teach Me” series. Hanging out on the vineyard taught me a lot, but there was a pretty big gap in my knowledge: beer.

I was able to connect with the folks at Bad Martha to take an afternoon and learn how the brewing process goes.

The brewing process begins with the grinding of your malt. Barley is one of the most commonly used in craft breweries, but wheat and rye are also common. The malt is crushed in the mill, then mixed with very hot water to begin brewing. This brewing operation is done inside the aptly named mash tun, a fairly large container.

Brewing creates a sweet extract called wort, which is drained into the kettle to be boiled. The surplus of spent grain goes to local farmers to feed the livestock.

Then boiling begins. The boiling of the wort is responsible for pasteurization, and this is when the hops are added.

Hops added earlier will boil longer and increase bitterness, while hops added later and boiled for less time will make beer less bitter. Boiling is also the stage where other flavors can be added, such as blueberry, honey and others.

My favorite part of this whole process was most definitely the mashing and boiling as it adds a sweet baked aroma to the whole room. Plus, the Bad Martha team were super cool and let me get on the mash tun to mix the concoction, which made me feel like making a bowl of oatmeal for a giant.

I remembered my days as a baker, where you could taste sugar in the air of the bakery, kind of like that sugar storm scene in “Gone Girl” where the character of Rosamund Pike tells about the times. where the character of Ben Affleck made his date behind a bakery where sugar was delivered and kissed him. (Affleck’s character ended up paying a lot for it because, well, you should just watch the movie.)

The next step is fermentation. The wort is cooled so that the yeast can be added. Since yeast is alive, the temperature it lives in is a bit picky. (Why do we New English people suffer from such long winters?) With the yeast in the cooled wort, brewers wait a few days to let things ferment. The yeast consumes the sugar from the brewing process and turns it into alcohol and carbon dioxide. Bad Martha offers two types of brewing yeast: brewer’s yeast for the fruity flavors and lager yeast for a cleaner, less complex beer. Then comes the conditioning, so the beer can mellow.

The last step is to take a glass and pour a large one from the tap, or open a bottle and drink.

This reporter got to try his hand at making Mischievous Mermaid IPA, a New England-style 7.7% ABV IPA, earlier in the summer. It is described as a hazy and medium mouth feel, filled with a great flavor of tropical and juicy aroma. You’re in luck too, because it’s available at the brewery.

Fun fall flavors on the deck are Oktoberfest MÃ¤rzen and Pumpkin Ale.

Oktoberfest is 6.1% ABV and is a management favorite. â€œPersonally it’s just one of my favorites for the season. It’s what I always drink after work now, â€said Chief Brewer Bryan Link. â€œFor Oktoberfest, it’s a traditional German-style lager, so it’s a bit malty with a nice hop bitterness, and a bit of aroma to back it upâ€¦ It’s a really well balanced beer.â€

Pumpkin Ale is a 6% ABV made from cinnamon, nutmeg, ginger, vanilla and pumpkin. When Pumpkin Beer begins brewing on the island, Bad Martha’s will be using pumpkins from Morning Glory Farm. The brewing process differs slightly for pumpkin beer. â€œFor the pumpkin beer, we add the pumpkins to our mash, and that makes a much thicker mash,â€ Link said.

Link is joined by Cal Scarfone in Edgartown and Cam Carter in Falmouth to create the delicious seasonal beers. Both beers are available at both Bad Martha’s establishments, ready to serve.

Bad Martha has other beers in her repertoire such as the Coffee Porter, made with Chilmark coffee; Beach Plum Dubbel, aged with island beach plums collected by the FARM Institute; and the Oyster Stout, made with local Cottage City oysters.