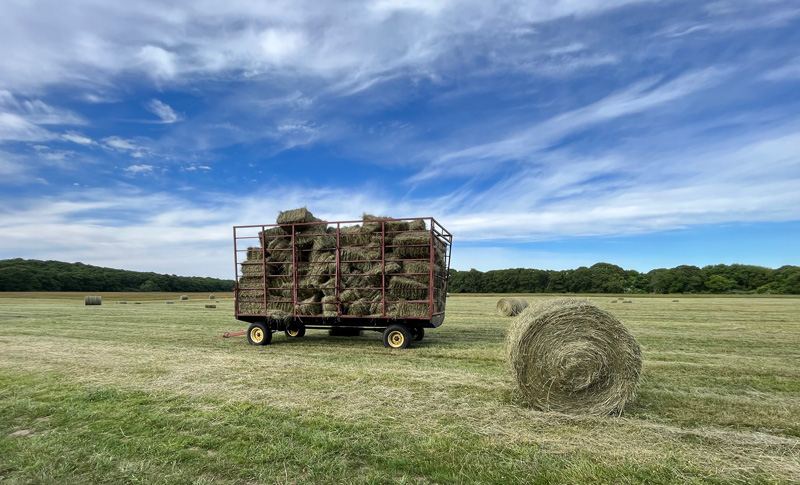 The peak of the garden year has already passed: the summer solstice. Do not worry; there’s still plenty of action to come, though the energy of the solstice reminds gardeners that everything on earth is powered by light: plants, gardens, and ourselves. And now summer is here!

The hay that is removed from Island fields is “stored summer sun,” that is, solar energy that allows livestock to convert into fat and protein. We reap the benefits, since humans are not grass eaters.

On the other side of the platform of my truck, in the parking lot of a garden center, a pleasant exchange with a gardener took place. She asked me if I would be interested in another project, and while refusing another project, I asked her to tell me what the problem was. She described a problem with established box trees in her garden, including one that had died during the winter.

Those who have box trees in their gardens are generally very attached to them. These durable, slow-growing plants bring an element of timelessness, even mystery, to gardens, where they are often an essential part of garden architecture.

Without actually inspecting the plants, it was unwise of me to draw any conclusions; and so I tried to give some general information that might help in finding a solution. I repeat it here because boxwood today faces several problems in our region.

First of all, over the years I have known many people, including people in the industry, referring to “boxwood” (Buxus spp.) which was actually Japanese holly (Ilex)! Confirm that the plants in question are indeed boxwood.

(Several Japanese hollies, including I. crenata and I. crenata ‘Hetzii,’ resemble buxus, and are in fact now widely used as a replacement where boxwood diseases have caused a problem in their use. Nevertheless, hollies Japanese have their own set of possible problems.)

Disease problems with boxwood – and there are several, fungal and bacterial – have both environmental and situational causes. Laboratory analysis is necessary to reveal the explicit pathogen. While many plants are hardy and undemanding, modern landscaping practice has imposed problems.

Many longtime islanders know of venerable island homes guarded by an equally venerable set of boxwood flanking the gate yard: sturdy, unmaintained, and seemingly ancient. Let the place change hands or hand it over to a mowing and irrigation crew, and problems may arise.

The root systems of the box trees we commonly plant here are fine and close to the surface. Locations with poorly drained soil, irrigation heads or downspouts can cause problems. I had this at home: Dwarf boxwood trees that had been in place for 25 years started to collapse during a winter with unusually heavy downpours. They were adjacent to a downspout and basically started to drown. I had to cut two inch thick wood to save the plants. They still look like amputees (boxwood is tough and wants to survive!), but otherwise they’re fine.

Boxwoods in turf are vulnerable to damage from trimmers; I have seen this in several gardens. If they are sheared (a no-no, actually, with the increasing incidence of boxwood blight), instead of being picked, a layer of dense foliage forms, like a carapace that admits no air nor light inside the plant. Debris and dead leaves accumulate, retained inside the plant, favoring (purifying?) the potential for diseases. In addition, each cut leaf surface is an entry point for disease and a source of stress for the plant.

Just today, working in a garden with older and newer boxes, I noticed one that had a broken appearance around the edge. I looked inside and didn’t like what I saw: wet, discolored leaves. This plant needed immediate thinning. I cut out handfuls of seven inch sections to admit more light and air inside the plant and will keep an eye on them.

Now is the time to trim, prune or shape the early and spring-flowering shrubs. These include the very early lemon-scented Lonicera fragrantissima, viburnums, weigela, rhododendrons and azaleas, spirea and kolkwitzia.

Spring flowers form their blooms on the wood of the previous year. If grooming is done now, there will be no loss of flowers next spring. Since becoming aware of the widespread damage the lilac moth is causing to lilacs on the island, I have come to restrict pruning of lilacs to removal of seed heads only, no larger wood. that. Lilac borers use the scent of cut wood to locate places to lay eggs for their larvae. Save the shaping and removal of old wood for later in the season.

Keeping vegetables coming is a challenge when heat and dryness come into play. Salad greens are proving to be particularly heat sensitive as we head into the hottest part of summer. Successive plantings of lettuce, beans, spinach, radishes and other fast-growing crops are best. Extend the pea harvest by saving the picked pea pods.

Crabgrass is making an appearance, particularly troublesome in lawns, as well as in peastones and flower beds. The same goes for seedlings of various biennials and pollinator-friendly garden plants. If it reseeds itself successfully, it is a pollinator-friendly plant! Examples: Verbena bonariensis; several members of the milkweed family, milkweed (Asclepias tuberosa) and swamp milkweed (A. incarnata); coriander and arugula in the vegetable gardens; and digitals. You will have to decide what to keep, eliminate or move. Remember that next year’s low cost, low effort plants are this year’s seedlings.

At Napa’s Cain Vineyard and Winery, planting a new future means learning from…