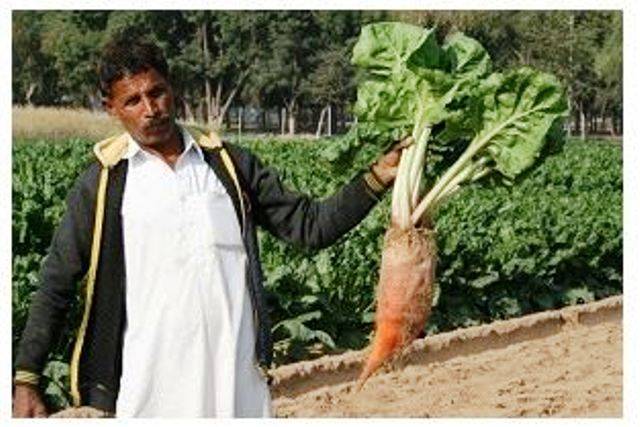 Fodder beet is best for livestock; Is nutritious and ensures high milk yield

The availability of green fodder for farm animals has always been a challenge for farmers in arid regions due to the harsh and unpredictable environment. With this in mind, the ICAR-Central Arid Zone Research Institute in Jodhpur, Rajasthan has developed a new forage crop, forage beet, a plant that produces tubers with an average weight of 5-6 kg.

What is fodder beet

It is a high yielding green forage crop that is slowly gaining popularity in dry or arid regions. The crop with a production potential of around 200 tonnes per ha of green biomass in just four months can be grown profitably with poor soil and water.

Forage for this crop is available between January and April when there is too little availability of other forage crops. With a production cost of less than 50 paisa / kg of produced biomass, the crop has a very high water use efficiency of 28 to 32 kg of green biomass / m3 of water. Feeding trials on the Tharparkar breed have shown an 8-10 percent improvement in milk production.

The crop is now cultivated in other agro-climatic regions as well. Farmers in Chhattisgarh, Madhya Pradesh, Haryana, Uttar Pradesh, Maharashtra and Kerala have also tried and seen positive results.

For higher yield, you should look for loamy soils, but it can also be successfully grown on saline soils. The good sowing period is from mid-October to November.

The crop needs a fine seedbed and should be planted on ridges. The field should be plowed 3-4 weeks before sowing with a turning plow which should be followed by cross harrowing and leveling. Ridges with a height of 20 cm should be prepared with a ridge former at a distance of 70 cm. About 2.0-2.5 kg of seed / hectare is needed for an optimal population of 1,000,000 plants / hectare. The seeds should be placed halfway to one side of the ridge at a depth of 2 to 4 cm and at a distance of 20 cm between the plants.

Important varieties include Jomon, Monroe, JK Kuber, and Geronimo. As many varieties are multi-germinated, i.e. a single seed produces 3-4 seedlings, therefore thinning is required after 25-30 days.

Water the field immediately after sowing. In flood irrigation, the water in the furrows must not exceed 2/3 of the height of the ridge / overflow. Nitrogen must be applied in 3 fractions, – half at sowing and 1/4 each at 30 and 50 days after sowing. It requires 10 to 12 sprinkler irrigations with a total need of about 80 to 100 cm of irrigation water. It can be grown profitably with saline water as well as alkaline water.

Usually, uprooting can be done when the root weighs 1.0-1.5 kg (mid-January). As a result, farmers can uproot daily as needed for feed for their livestock. Since the roots remain 60 percent out of the ground, they can be harvested manually by pulling out. The foliage should also be given to animals.

Breeding 200 years ago in Missouri