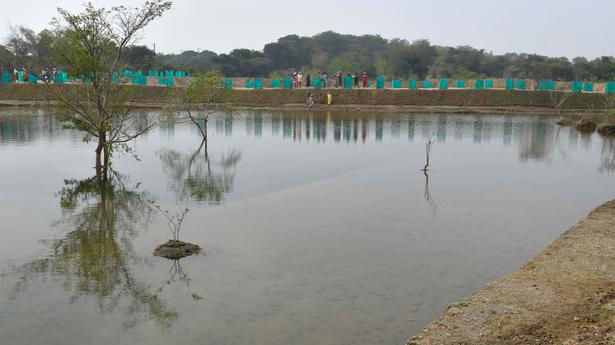 Villupuram District Administration in association with Rural Development and Livestock Departments have identified 47.5 acres of pasture land out of a total of 98 acres at Olakkur near Tindivanam to grow fodder for livestock and ensure rapid supply to dairy producers.

Official sources said it was part of a statewide initiative to identify the ‘Meikkal’ land to grow nutritious fodder for livestock. The 98 acres of land that remained under encroachment were recently reclaimed by the district administration.

“The land was barren. The administration engaged the services of about 2,045 active Mahatma Gandhi National Rural Employment Guarantee Act workers and leveled the playing field. Approximately 47.5 acres of the total area of ​​98 acres have been identified and developed for growing livestock fodder. An agricultural pond was dug on the land while a community well that remained unused on the site was also restored to collect rainwater,” said District Collector D. Mohan.

“The land has been cleared and developed for the cultivation of fodder tree species like Subabul, Neem, Kalyanamurungai, Glyricidia, Velvel and tree species adapted to the local agro-climatic zone. There was a systematic convergence of various executing departments such as rural development, agriculture, horticulture, agricultural engineering and Mahalir Thittam. Works including land reclamation, establishment of contour lines, establishment of fodder tree nursery and planting of fodder crops and trees have been carried out by MNREGS workers,” a- he added.

The administration had dug a percolation pond on a two-acre stretch inside lands identified for grazing and rejuvenated a community well. This would now help recharge the water table. About 560 teak trees had been planted on the dykes of the pond by MNREGS workers while no less than 14,000 saplings of various species were prepared by the Department of Horticulture on a monthly basis at a nursery in the region, the collector said.

“During the colonial period, separate poromboke grazing lands were set aside in each area for the benefit of the livestock of that area. However, over the years the pastures have been invaded or used for agricultural purposes resulting in shortage of pasture for livestock,” said T. Manoharan, Joint Regional Livestock Manager, Villupuram Region.

Science-based pasture rejuvenation was important to dramatically improve forage availability, he said, adding that the intervention would provide effective land cover as well as ensure availability of nutritious forage for livestock, sequester carbon and protect the environment, he added.

Mr Mohan said the land would be handed over to the respective village panchayat for further maintenance. A village-level pasture management committee (VPMC) will also be formed for effective pasture maintenance, he said.