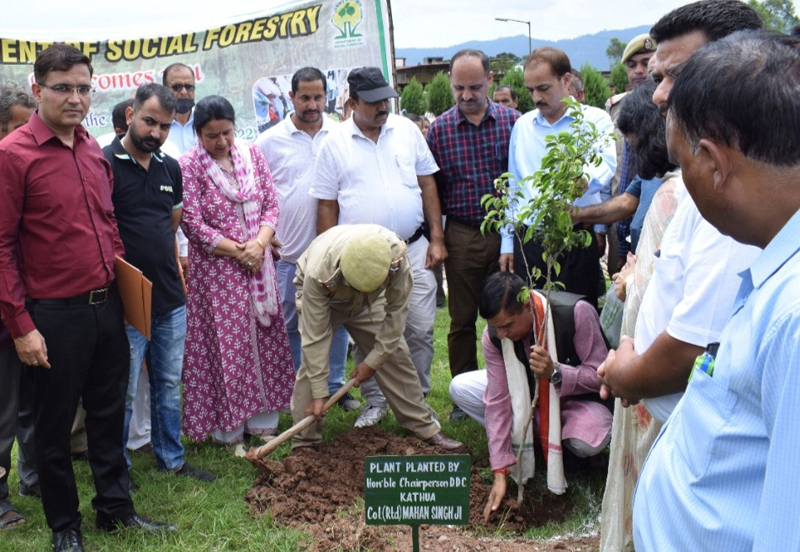 Excelsior Correspondent
KATHUA, August 2: The Department of Social Forestry celebrates Azadi Ka Amrit Mahotsav by hosting a series of events as Jan Utsav in the spirit of Jan Bhagidhari.
As a continuation of this social campaign, the middle planting strip of the Phinter -Billawar road was inaugurated today by the Chairman of the Kathua District Development Council, Col (Rtd), Mahan Singh, in the presence of Prof. CCF and Director , Department of Social Forestry, J&K, Roshan Jaggi, DDC Member Billawar, Bikram Singh, Chairman MC Billawar, Gopal Basotra, DDC Member Mandli, Neeru Bala, BDC Member, Ashok Kumar and Additional Deputy Commissioner Billawar, Sandesh Kumar .
The event was followed by Van mahotsav-2022 celebration at Government Degree College Billawar campus.
During the awareness campaign, booths set up by the department highlighted different activities and the role of social forestry in greening J&K, improving the environment, creating jobs and conservation of natural forests.
Meanwhile, different species of medicinal, ornamental, fruit and shade tree seedlings were distributed free of charge to visitors and participants.
A green pledge was read and repeated by the participants, in which all pledged to keep the homeland clean and green, to take care of animals and plants, to avoid using polythene and not to waste water .
During the interactive session in the multi-purpose hall of the college auditorium, the main guest, SDC President Kathua, spoke about the importance of trees for the survival of life on Earth. “These are precious gems that we must keep safe for the future generation to come,” he argued and advised the youths to keep the earth clean and green.
Senior Chief Conservator of Forests and Director of the Department of Social Forestry, Roshan Jaggi shared his vast experience and educated the masses on the role of the Department of Social Forestry in improving the environment and raising the socio-economic condition of the rural mass.
Professor Anita Jamwal, Director of the College, Mandli, member of DDC, Neeru Bala and the presidents of the plantation committees of the village of Panchayat also spoke on the subject.
The first prize in the debate contest was won by Manju Mahajan, while the 2nd and 3rd prizes were won by Kriti Sharma and Mansi Sharma.
Similarly, the first prize in the painting competition was won by Rukshar Akhter, while the 2nd and 3rd prizes were won by Kushvinder and Simran Sharma respectively. Previously, a green march and anti-plastic campaign was organized by the College’s Department of Social Forestry.

Is the “No Annual Fee” Visa Petal 1 Credit Card Worth It?