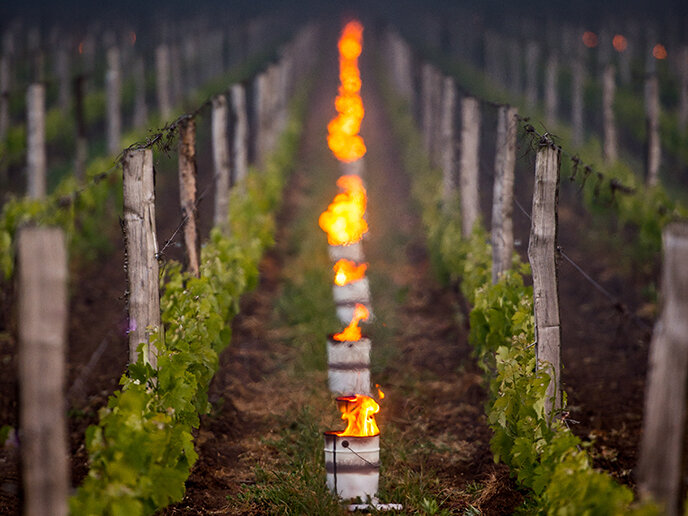 Can flaming torches really save a vineyard from frost?

There are many things a winemaker can control: where to establish a vineyard, what varieties to plant, when to apply water and fertilizer. But the weather is not one of them. Earlier this year, 2 billion euros worth of wine was lost in French vineyards alone, following a period of extreme cold.

When European winemakers face sub-zero temperatures that can spoil tender young grapes, they can grab their torches, creating otherworldly scenes as hundreds of flaming lanterns are dotted every few meters across the vineyard.

Do the lanterns work? And can we develop a more environmentally friendly alternative? To answer this, it is necessary to understand the conditions under which frosts form.

Bas van de Wiel, a professor of atmospheric physics at the Delft University of Technology, explains that low temperatures are just one element necessary for freezing to occur. “At night, the ground cools and creates a pool of cold air. If the air becomes calm, temperatures can get very chilly near the surface,” he explains.

With enough wind, the cold air blanket is disrupted before it becomes cold enough to create frost. “On a windy night, things keep rolling. But when the sky is clear, the surface can cool down due to thermal radiation, and you see a collapse of turbulence.”

Van de Wiel’s research, supported by EU funding, shows that wind speeds of less than 3 meters per second at nose height lead to freezing conditions. Rather than directly warming the vines, van de Wiel explains, the torches work by disrupting this static layer of cold air.

“Suppose the boundary layer is dead – sometimes you have local ditches, hotspots. These act like little chimneys, and this movement adds to the energy exchange.”

To test the effectiveness of disrupting this boundary layer, van de Wiel and his colleagues installed large fans in several vineyards in the Netherlands. “The results were so good, the harvest increased by 100%, and we were able to perfectly show that the temperatures and the harvests increased with the proximity of the wind turbines. »

He adds that flaming torches are very inefficient and that the large silent fans used by his team wouldn’t be as labor intensive either. Good news for winemakers, though photographers and sightseers may miss the spectacle of springtime vineyards lit by hundreds of twinkling torches.

Things to keep in mind before starting a breeding business