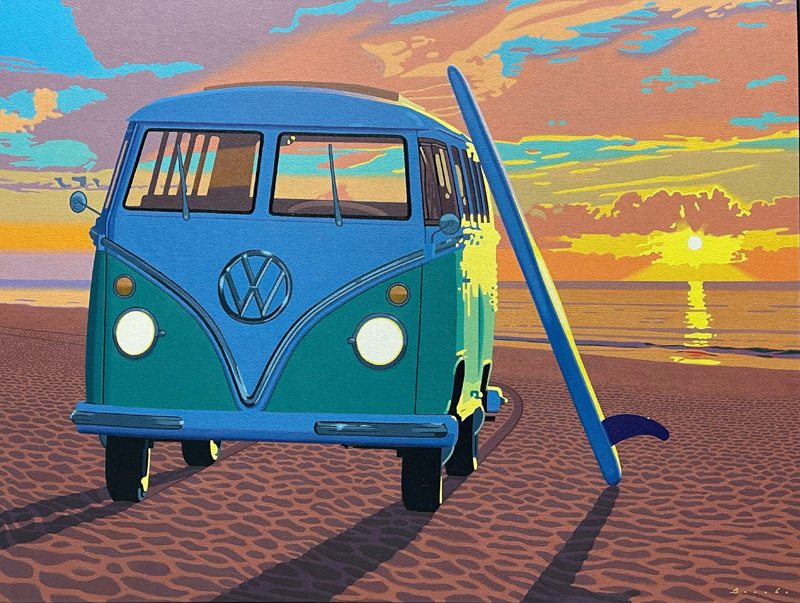 Bold and Beautiful New Work at the Eisenhauer Gallery

Head to the Eisenhauer Gallery this weekend for a festive art opening with refreshments and live music in the courtyard. For the past two years, although the popular Edgartown gallery has remained open, bi-weekly openings have been suspended until now. This weekend will mark the 23rd year that the historic gallery will host a Memorial Day Weekend Kickoff Exhibition, showcasing new works by three of their established artists along with a roster of others, including four artists new to the gallery this year.

“The Memorial Day opening is near and dear to my heart,” says owner Elizabeth Eisenhauer. “We see the owners of second homes who have supported the gallery for years. Everyone is outside. It’s a kind of homecoming.

The long-running Music in the Courtyard series kicks off Saturday with a concert by Mike Benjamin, Joanne Cassidy and others, when guests can sip white sangria while perusing the gallery’s vast collection of contemporary works. Concerts are held every Thursday in the courtyard, always featuring popular Island musicians.

The star performers for the opening show will be Rob Brooks, Michel Brousseau and Cheri Christensen. Each of these painters, who have attracted followers among patrons on the island and beyond, has a distinctive style and choice of subject matter.

Brooks captures iconic American scenes in a style he describes as social realism. Selecting moment-in-time snapshots, Brooks captures the essence of a place through something as simple as a colorful beach ball left behind after a day of fun, with a setting sun illuminating the sky behind. -plan, or the iconic ice machine at the Menemsha wharf, overlooking the harbor and the rocky pier. With each scene, a familiar object makes the landscape or seascape personal and immediate. The gallery’s website describes Brooks as an artist whose “work could be called Modern Americana, and it focuses on urban scenes, seascapes, contemporary icons and, in his words, ‘kitsch'”.

Michel Brousseau, who was born and raised in France, similarly uses simple objects to evoke a time and a place. Its sole focus, however, is on nautical subjects. Brousseau’s love for the sea and ships is evident in his paintings of things like windblown sections of sails, buoys hung against a shingle wall, or a weathered red ship’s lantern. His style is similar to realism, but graphic in nature. In his artist biography, Brousseau writes: “Perhaps I prefer the maritime places, objects and artefacts of marine culture to the sea itself, because I can tame and control them. For the Eisenhauer Gallery, the award-winning artist has created a series of paintings described as “dedicated to the nostalgic charm of the island”.

Capturing another aspect of island life, Cheri Christensen chose barnyard animals as her point of reference. Geese, roosters, ducklings, cows, goats and pigs populate Christensen’s artistic estate, captured close-up in their natural environment. In a semi-impressionistic style, she uses rapid, bold brushstrokes, enlivening her subjects and evoking the bustling farm life of the island. “I prefer early morning or late afternoon light settings, with extreme backlighting,” Christensen writes in his artist statement. “I focus on farm animals, their character, and the use of color, light, and texture to convey a mood.”

In addition to the featured artists, Eisenhauer will present new works by dozens of others, including four newcomers to the gallery. Adair Peck creates figurative and semi-abstract imagery in mixed media paintings and sculptural wall pieces, executed with a strong sense of color and form.

Cecil Touchon takes a graphic approach to his paintings, featuring letters, symbols and geometric shapes in black and white or bright colors.

Lily Sol created a multicultural world in her “Flower Goddess” series, encompassing colorful portraits of women, which she describes as “honoring the divine feminine energy within all of us.” Using color, form and decorative elements very effectively in his multimedia work, Sol presents bold, highly stylistic and appealing images that display the human spectrum in all its variety.

The introduction of these new artists adds an extra dimension to the gallery’s already rich tapestry of unique and varied works.