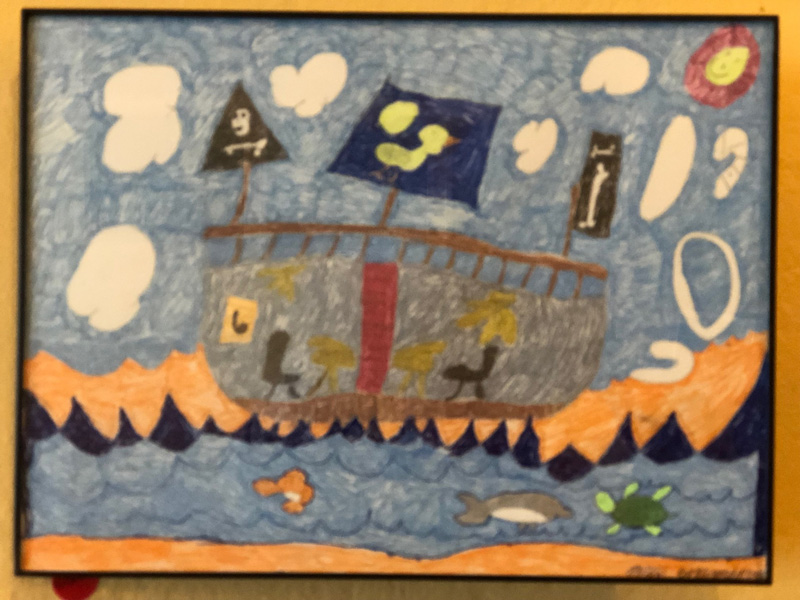 There are two things that excites Alexander Campbell. One is to keep the streets, beaches, and wooded areas of the island as litter-free as possible. The other is artistic creation. The results of the latter – a series of whimsical designs – are currently on display at Mocha Mott’s in Vineyard Haven, with a percentage of the proceeds going to MADD (Mothers Against Drunk Driving).

This organization is the one close to Campbell’s heart. In 1989, the car he was driving in with his family on a trip to Mexico was hit by a drunk driver. Two family members died and Alexander, who was only 3 years old at the time, suffered a head injury. Alexander’s mother, Kathy, who was herself seriously injured, spent as much time as possible near her young son’s hospital bed watching over him while he was in an induced coma. Once Alexander got home, his mother asked him if he could tell, while he was in a coma, if she was there by his side. He replied that he could, and that during his absences he was comforted by his guardian angels.

“I’ve had many guardian angels in my life,” says Alexander, who now leads an active adult life. At some point he began drawing angels, often sitting outside the Vineyard Haven home he shares with his mother. When people stopped and showed interest in his designs, he decided to print them on cards, which he then sold to help support MADD.

Eventually, Alexander expanded into other subjects, creating colorful drawings of animals, landscapes, seascapes, sea life, barns, houses, and whatever else his imagination suggested. “I just start drawing and everything that comes out comes out,” says the prolific young artist.

“I just wanted to draw one day, and my mind took over once the pen hit the paper,” he says of his early days as an artist. “Drawing for me is a bit like driving a car. I’m visually impaired so I can’t drive, but with my drawing it’s a bit like having your hand on the steering wheel without brake lights.

Alexander’s drawings incorporate a variety of mediums including Sharpies, color pens, pencils, gel pens and more. He favors color – a lot. Pictures at Mocha Mott are all framed and ready to hang. They are priced at a modest $40 and so far most have sold out. This is the third time Alexander has attended a solo show at the popular Main Street cafe.

In addition to his works of art, Alexander is dedicated to pursuing an individual cleaning project. He enjoys walking, running, and hiking, and he always strives to pick up trash wherever his travels take him. “I help Mother Earth,” he says, adding that his pet peeve is people throwing cigarette butts on the ground.

The cans and plastic bottles that Alexander collects go to one of the recycling machines on the island. People often drop bags of cans in his yard to recycle. “I tell people who drop cans off me that I’m going to play nickel slots,” he says with characteristic wit.

Alexander spent 13 years working at Chilmark Chocolates, until they closed in 2019. He also participated in Martha’s Vineyard Playhouse’s Vineyard Independence Project (VIP) program for many years, serving as an usher and appearing on stage as than Old Crow. in “The Snow Queen”, among other roles.

Alexander can be found most days at Mocha Mott’s enjoying a hot chocolate or an Irish breakfast (with two tea bags, a recipe he calls “tea without gravity” because, as he explains with humor, “It makes you float above the ground.”) He is one of the most popular customers, having forged a friendship with many employees.

“Alexander is a great guy,” says Meredith Aldrich, owner of Mocha Mott’s. ” He is very popular. Everyone loves him. Part of what makes this job so fun is that you get to know the locals, and Alexander is such an important part of our community.

An exhibition of Alexander Campbell’s drawings will hang at Mocha Mott until the end of the month.