The Martha’s Vineyard Agricultural Society has a new president, new directors, and new officers following its annual meeting last week, marking an important changing of the guard for the venerable island institution established in 1859.

The annual meeting signifies a time of change for the venerable society. – Mark Alan Lovewell

Brian Athearn, owner of Runamok Farm in West Tisbury, and MV Tech, a computer repair center in Tisbury, was elected chairman. He replaces longtime President Dale McLure, who has left the island.

At the annual meeting on November 15, Mr Athearn said this marked a turning point for the organization just as important as it was two decades ago when the company moved to its current location on Panhandle Road.

We are currently going through a transition internally, ”he said. “We are moving in a new direction. I’m on the tech side and own a small farm. I feel I can be an intermediary between the two.

The new president said he wanted to return the company to its agricultural roots, although he acknowledged that the organization faces financial challenges.

“Most of what I would like to do is focus on integrating agriculture into society a little more than it has been,” said Mr Athearn. “If we are to fund these programs, we will have to find outside people to fund them, educational programs, soil programs, agricultural programs, livestock programs. These are all things that are in our charter that we should be doing, that everyone has been too busy doing. “

Jim Athearn (Brian’s uncle) was re-elected vice president of the company on the recommendation of the nominating committee. Two other vice-presidents, Julie Scott and Bea Whiting, were also elected after indoor appointments. 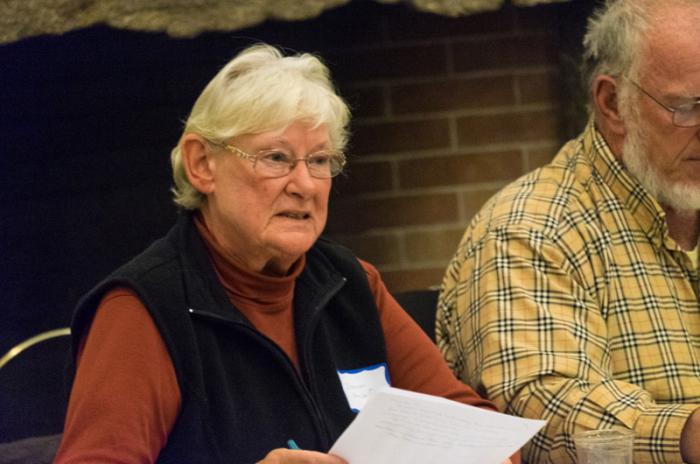 The company’s voters unanimously amended the organization’s bylaws to impose term limits on the 16 members of the board of directors, effective January 1, 2018.

Going forward, Trustees will not be able to serve more than two consecutive four-year terms as a Trustee. A director could run for office after a one-year hiatus.

Long-time director Jim Athearn said the bylaw amendment was one way to bring new leadership to the company.

“Every year we kind of rode with the same old people,” Mr. Athearn said. “It’s been 40 years for me. It seems like one of the ways to get more people there is to get a few out of it. This is what we are offering here.

The new managers and trustees immediately face formidable money problems. The Agricultural Society is about $ 1.1 million behind in mortgage obligations stemming from a land purchase and the recent construction of a solar panel.

Mr. McLure, the outgoing president, spoke only indirectly about the financial situation of the company.

“Over the past year, we’ve had a lot of changes,” he said. “A lot has happened. We tried to jump to what we call the next level. We needed to have staff. We are going through change, change, change. It was a tough, tough race. These are growing pains.

Sally Rizzo, part-time general manager hired as a consultant this year, noted that the finance committee has been reactivated after a period of inactivity. “We have some challenges,” Ms. Rizzo said.

Ms. Neubert delivered her final show report at the annual meeting, as she stepped down as show manager after 34 years.

She offered some advice to her successor.

“For anyone who steps in, remember, keep in mind, agriculture first, education, fun, stay local, and the most heard comment from fair goers over all these years is the reason they come, off the island and the islanders too, is they love the vibe of an old fashioned fair that is not commercial.